On Tuesday night, we attended the third of Urbane Restaurant's Vegan Dinners. While this is the Dilettante's second time at Urbane, it was my first time, and the first time that both of us had eaten under new head chef Alejandro Cancino. 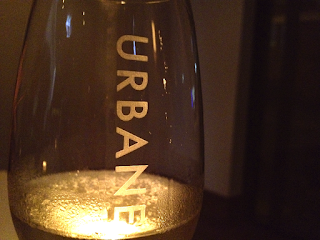 The dinner began at 6:30, so we arrived in the city at around 6:00. As we were quite early, we went next door to The Euro for a pre-dinner drink. I had the Treacle Re-Fashioned and Matt had an Apple Blossom Fizz. While at the bar, we pretty quickly struck up a conversation with the other vegans who recognised us from our business or recognised me/whom I recognised from work. A little before 7, we were all directed to move back to Urbane for the start of the meal.


I must apologise for the quality of the photos: there was very little lighting so I had to use the harsh iPhone flash to take photos where the food was visible! Believe me, it all looked better than it... looks. Disclaimer: I've done my best to correctly identify all the components of each of the courses and use the correct terms, but with so many, I may not have always done so!

Soon after we were all seated, we were presented with a wine list (all vegan!) for the evening. I selected the 2010 Hilberg 'Verij' Brachetto from Piedmont, Italy. At first, I found it too acidic, but later courses revealed the most beautifully fragrant bouquet, and I ended up ordering a second glass later in the meal. I was moderately disappointed that there was no option for a wine degustation along with the meal as, though the Brachetto matched perfectly with many of the courses, it was not an ideal match for others. Of course, it is understandable that the sommellier may have taken a more-than-well deserved night off!

The meal began with three entrees: a small square of absolutely exquisite butternut pumpkin polenta, a coin of pear topped with black garlic and sesame, and potato and onion seed crackers topped with eggplant (I'm afraid my memory has failed and I can't be 100% sure of the role of each ingredient), presented on a beautiful twisted log. Typically, Matt and I liked exactly opposite thing: me, the polenta, and Matt the potato and eggplant cracker.


This was followed by a leaf of fried kale, the vibrant green of which belied its fragility: it readily crushed beneath my knife, and crunched delicately in my mouth, simply but deliciously seasoned, like the thinnest crisp you can imagine. No sooner had we finished the kale when the next course came: a nut cracker served on a bed of buckwheat with a hazelnut emulsion. Unfortunately, the nut cracker had very little flavour and a rather unpleasant texture, though the hazelnut emulsion was absolutely beautiful, and Matt and I readily fought over the little that was left!


A vegetable escabeche topped with a sorbet made of the escabeche signaled the end of the entree courses.


Before the main plates began, we were present with a loaf of rye sourdough to share: at the end, we were lucky enough to have a whole loaf between the two of us, whilst most others had to share between four. I was a little disappointed that the butter served with the bread tasted like Nuttelex with some added salt (perhaps to replicate the saltiness of butter), but the bread was absolutely beautiful, served on a bed of hot stones. 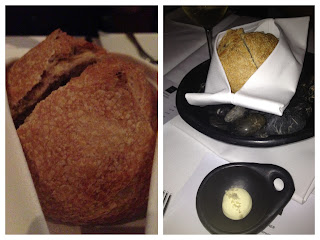 The first main plate was hummus and black olives served in a herb broth. Some clever diners had saved their bread to mop up the delicious broth (as was no doubt intended!), but ours was long gone by the time the plate arrived, so we were very nearly reduced to licking the bowl (fear not: we resisted temptation!)

As much as I am almost militantly against cooking avocado, the next dish proved me wrong with a partly fried slice of avocado, served with pickled onions and tomato seeds served in almond milk. Though every component was spectacular, it the almond milk (invisible due to the white plate) that truly blew us away. Rich and creamy, the milk was lightly seasoned with (I believe) soy sauce (rather as soy milk may be seasoned with light soy sauce to serve with tofu: just enough to add richness but not so much as to blemish the porcelain white of the milk).


The next dish was charred leeks and a potato puree topped with almond-studded croutons served with ponzu, a Japanese citrus and soy sauce. This was, in turn, followed by shiitake mushrooms and fried parsnip in a yeast broth.

As the sweet courses approached, I opted for a the 2010 La Pigeade Muscat de Beaumes de Venise, of the Rhone Valley. This ended up being an extremely wise choice, as its lychee notes echoed the lychee granita, served with cherries, almond cream, and almond milk that constituted the second last course.

The final course for the evening was a coconut ice cream with blueberries, served over a coconut foam and topped with basil. The coconut foam had a slightly salty edge which, though surprising, was curiously pleasant.


The evening rounded off with coffee or tea and a petit four: a dollop of cream and a single raspberry sandwiched between two pink raspberry wafers.


Alejandro came out to the table and discussed that the dinners were still evolving: each dinner involved perhaps some similar recipes, tweaked slightly, as the kitchen, and indeed Alejandro, familiarised himself with the tastes and textures of each dish. Our dinner was the first to use this entirely new menu, some parts of which will no doubt appear in some variation over the next few dinners.

We also discovered that half the table were vegans (all seated together, of course!) and the other half were... not.

Overall, the evening was wonderful. Despite the fact that there were few proteins, the dinner beautifully demonstrated the breadth of food that is, surprise surprise, vegan, and focussed on the inherent simple beauty of vegetables. I don't think any who attended left with perhaps previous misconceptions of the vegan diet as "restrictive" or "boring", and, as Alejandro said, I have no doubt that they, perhaps for the first time, saw the vegan diet as something that they could do. Ultimately, though, vegan, vegetarian, flexitarian, or omnivore, it's a night for those who love food.

The Urbane Vegan Dinner shows great promise and we hope it becomes a permanent fixture in the Brisbane dining scene (and, indeed, the Australian vegan dining scene!). We cannot wait to attend another in future and see what other incredible creations Alejandro has come up with, and how some of our favourites from this night have evolved. We're extremely lucky to have someone with Alejandro's skill in Brisbane, especially as he is so excited to bring vegan food to a broader audience.

Whether you're a vegan curious about fine-dining, or a fine-diner curious about vegan food, Urbane's Vegan Dinners will not leave anyone disappointed.

The next Vegan Dinner will be held at Urbane Restaurant on April 11. To make a reservation, call them on (07) 3229 2271 or email reservations@urbanerestaurant.com