Lana Del Rey knows that she's bad for us. But like good marketing, and like a good salesperson, she still manages to suck you in, hook, line and sinker. For the most part.

Her new release: "Born to Die: The Paradise Edition" is somehow simultaneously a prologue and an epilogue to Born to Die. In some ways, improvements have been made, but seemingly deliberately, other aspects that worked so well on the first album have fallen away. 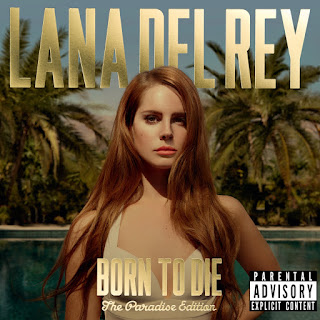 On the first listen of Paradise, the immediacy, urgency and hooks of the first album are not apparent. Many of the songs have a mesmerising, slow hook to them that takes time, but unlike challenging-but-great works by other artists (such as Kate Bush's "The Dreaming", or Tori Amos' "Boys for Pele", you do get the feeling that some of these "songs" are mere concepts, or demos, that would have benefited from more time to fully flesh-out, and develop, a bit like Marina and the Diamonds' recent bizarre and hit-missing album,"Electra Heart", that I wanted to like so much. This is a woman who knows she has a captive audience, waiting in the palm of her hand.

What started out as "Lana Del Rey", an intriguing persona for the singer Lizzy Grant, allowing her to seem in control of her own dark, twisted fantasy, and be aware of her own shortcomings, has denigrated. She willingly shows her nakedness and the ugliness of sheer existence, but without the mystique and hidden intrigue that was apparent and enthralling (despite the unnecessary and often distracting over-production) on Born to Die. From the lyrical concepts, you don't really get the sense that fame has changed her, or helped her to grow over this time.

Two of arguably the most successful and compelling songs on Paradise, Blue Velvet and Yayo, were originally released on Lizzy Grant's lost album, and one gets the sense that the moody, sexed-up Lana Del Rey is covering Lizzy here, still world-weary, but obviously with the newfound confidence and glamour that has developed from her access to popularity and audience - she now sings like Lizzy's cooler older sister.

A lot of the music sounds like snippets of advertisements, teasing you to keep listening - the word "vignette" springs to mind - which works fairly well, as for the most part, if you do continue listening, the music is snaky, and the hooks reveal themselves in time. Very little in the way of beats, electronica, or layering (the hallmarks of production over-used on Born to Die) is present here. It's almost like you're standing in someone's think-tank, but it's pleasant and mostly unjarring to listen to.

The problem I have with this album, and now Lana Del Rey herself, seems to be her own thought processes, revealed in the lyrics. On her first album, that sense of control and ownership of oneself was at times embarrassingly inspiring, and mysterious. Perhaps even delightfully self-absorbed and doomed. She drew you in, but wasn't openly damaging herself. On this album, she seems hell-bent on bleeding for (older) men, like the stereotypical Lolita, after her bad boy, but without the joy of sick-control. The term "daddy", is used a little too often, the lyric "my pussy tastes like Pepsi-Cola" is used as a hook (I wish I were joking), and various references to perhaps less-than-emotionally-supportive-sex are disconcerting for the listener to hear. I am aware that I am a massive prude, but this is no "Exile in Guyville", or even "Liz Phair", where there is enjoyment and interest in healthy sex for sex's sake - sex on this album seems like a way of self-harm, even a way of creating emotional psychodrama.

I am aware of my own tendency to prudishness, but with Lana becoming somewhat of a role model for emotionally lost teenagers, I do worry that this can develop and glamourise latent unhealthy thought processes and behaviours in listeners.

I do get the feeling that The Academic will wholeheartedly disagree with this review ;).

Finally, one can attempt to veil seemingly emotionally damaging concepts designed to shock under the guise of art, but like Lady Gaga, we have to ask ourselves: is the music good? Does the "shock" make me think? And despite what we're being told, is this really art? And does it really matter?
Posted by Matt at 15:06