I adore lasagna. Creamy, meaty, savoury, delicious sauces held in sheets of silky pasta... is there anything better? I rarely eat it, though, cause "real" ragù alla Bolognese takes 2 to 3 hours to make, and while the Homecooker means I don't have to stand around and stir it myself, that's a long time to wait! Is it worth it? Yes. Can I be bothered 90% of the time? Heck no.

Anyway, the other day after a tough day at work, all I wanted was lasagna, but after spending all day in the kitchen, I didn't want to spend all night either. A conversation a few months ago with Matt on how he was tweaking Bryanna Clark Grogan's amazing ragù recipe to make it a bit quicker had given me a few ideas, so I thought I'd give it my own shot.

After a couple more attempts, I think I finally cracked it. While this doesn't have the depth or complexity of the traditional ragù (which I'll still be making for special occasions), the speed at which it can be made more than makes up for that, and means you can have lasagna assembled and ready to go in the oven in about 45 minutes (if you make the béchamel in between stirs of the ragù, you can probably get it in the oven in more like 35, and have your lasagna (all from scratch!) in just over an hour!).

1. To a medium saucepan over medium heat, add 1 tablespoon each olive oil and vegan butter and 1 teaspoon of sesame oil.
2. Roughly dice 1 carrot, 1 red onion, 1 brown onion, 6 cloves garlic, and 2 stalks of celery and add this to the pan. Increase heat to medium-high and saute, stirring frequently, until vegetables are softened.
3. Add 2 cups TVP mince, 1 tablespoon soy sauce, 1 tablespoon nutritional yeast, 1 teaspoon dried rosemary, 1 teaspoon dried thyme, 1 chicken-style broth cube (or 1 tablespoon chicken-style broth powder), and 400g tomato paste. Stir together, then allow to sit for a minute or two before stirring again. Continue until mix has nearly dried out and is sticking to the bottom of the pan.
4. Deglaze pan with 1/2 cup dry red wine (you can use a dry white in a pinch) and reduce heat to medium. Stir until the wine has evaporated, then add 1/2-1 cup stock (homemade or store-bought), just enough to thin out of the ragù into an appropriately wet sauce. Stir in 1/2 cup soy milk (or other neutral-flavoured milk; don't use rice milk as it will add too much sweetness) and cook for a minute or two until it's combined. If sauce it too thin, reduce the sauce, stirring constantly, until it is the thickness you like. Season with salt and pepper; your sauce is done!

Either place on top of freshly cooked pasta and eat straight away, or use to assemble lasagna. If you're making lasagna, you can use Bryanna's delicious béchamel. 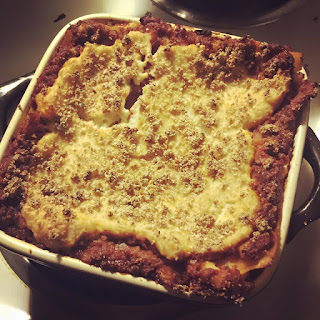 Incidentally, if you don't own Nonna's Italian Kitchen, RUN DON'T WALK and get yourself a copy. It is a book that I go back to again and again for both recipes and inspiration.
Posted by James at 10:48 1 comment: