Melt! Festival 2014, Summary and a Guide for Australians Going In Future

I've wanted to go to Melt! Festival for years, so when I finally had some time off accrued and needed a holiday, it seemed the perfect place to start my holiday (I actually bought my ticket for Melt! before I bought any other tickets).

I've only ever been to Australian festivals, so this was my first Real Festival Experience, and I had absolutely no idea what to expect.

Melt! is held at Ferropolis (in Gräfenhainichen), an open air museum showcasing huge industrial machines from the 20th century. And I mean seriously huge. It provides a stark and impressive background to the festival, as the machines are lit up, or erupt fire as night sets in. I wasn't entirely sure how to get to the festival, and then I read on the website about the Melt! MiXery Train. Basically, the train takes you to the festival, serves as your accommodation while you're there (each cabin has 6 beds (loosely speaking...)), and then takes you back. The train starts at Köln (Cologne) so I thought it would be worth it to catch it from there and get The Whole Experience. There's a bar (with a DJ) on the train that runs the entire time so it is a lot of fun. Unfortunately, I stupidly didn't look at the map properly, so, at the end of the festival, I caught the train back to Köln (it's something like 8 hours, and a lot slower when everyone is dead because they've been partying for three days), and then caught a plane to Berlin... which is only 2 hours north of Gräfenhainichen. Great work, James. I discovered this from a couple who shared my cabin; they caught the MiXery train back to Magdeburg (or possibly Braunschweig) and then caught a train from there to Berlin, which probably took them 3 hours and I think cost them about €30. Sigh.

I think the MiXery train is a great idea, and it's really convenient (and cost effective; you can also order the train ticket and your festival ticket at the same time through the MiXery website). My major problem was the beds were really uncomfortable, other people are grubby, and it was SO HOT. My bed got the first rays of light in the morning and by about 8am, it was so hot it was impossible to sleep. The shared shower and toilet facilities were nice and modern but, unsurprisingly, after about a day, they were grotty as all hell. So, I'm glad I had the "festival experience", and I would recommend it to people who are into that or haven't had it before. Next time, though, I'm booking a hotel with my own bed, shower, toilet and aircon. 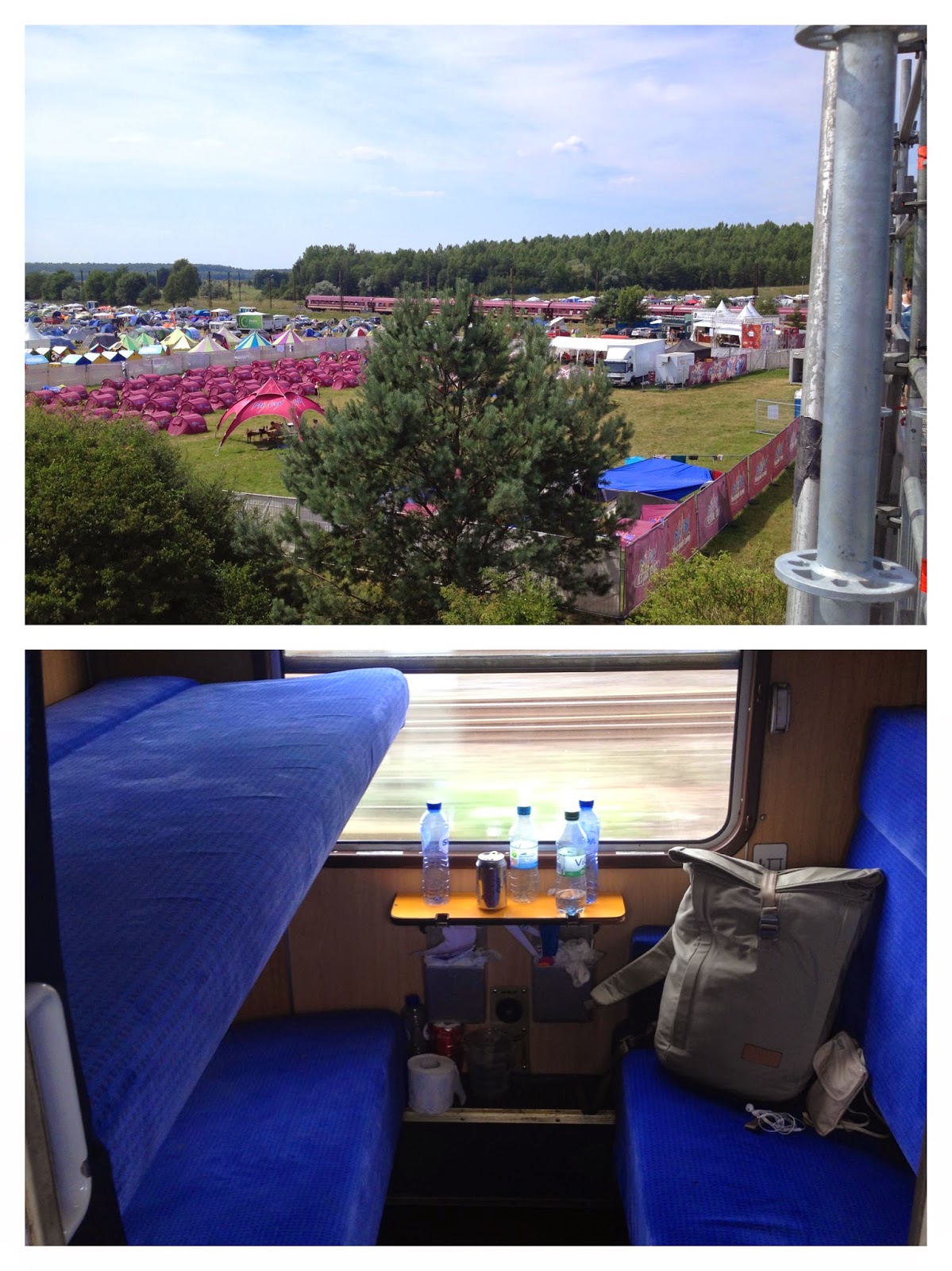 Aside from the MiXery train, a majority of people who come to the festival camp. MiXery provide a range of camping options that are all done for you, otherwise you can rent a camping space and either bring your own tent or rent equipment so it's all waiting for you when you arrive at the festival.

My favourite thing about Melt! is their sense of social responsibility. People who wear homophobic, misogynistic or racist t-shirts are banned from entering the festival; all artists have "meat free Friday" (the first day of the festival), and festival goers are encouraged to do the same); through some weird token system (which no one explains to you but Europeans just seem to understand it?), they encourage you to bring back all bottles you buy so they can be properly recycled. God knows why they don't ban smoking to get rid of that environmental mess but anyway... There's an organisation there handing out earplugs (how sensible!); if you don't want to schlep everything you've brought with you back home, they have collection centres to donate everything you don't want to charities for the homeless; and finally, every stage has a wheelchair accessible area near the sound manager so everyone can enjoy the show.

Of course, this is technically a food blog, so I should probably mention that. At the camping ground, there was only one veg food stand, and everywhere else the only real options were chips, so I was incredibly nervous about what the festival itself would bring. I shouldn't've been worried because it was AWESOME. There were about 3 or 4 dedicated veg food stands, and many of the other stands had veg options. Even the waffle stand HAD AN ENTIRELY SEPARATE VEGAN MENU. Standing on a beach, dancing barefoot to Alex Banks while eating waffles... it's hard to top that.


I heard a rumour that the organiser is vegan, which is why there's so much vegan food available. Even better, though, the food was actually delicious. None of this hotbox rubbish that is foisted upon us at Australian festivals: at the falafel stand, they were actually making falafel in front of you; there were delicious Hungarian dumplings served with freshly cooked caramelised onions; one of the vegan stalls sold non-canned baked beans... this food was seriously good. And it's pretty well priced: at one stand I got a chicken burger, a carton of soy milk, and a Twilight bar for €7. Seriously. THERE WAS EVEN A STAND WHICH MADE FRESHLY SQUEEZED JUICES AND SMOOTHIES (and you will need some of that by day 3...)

Anyway, since this is meant to be a guide, I should probably actually provide some guidance.

THINGS YOU THINK YOU'LL THINK OF BUT PROBABLY WON'T because I did
Rest up before the festival
The festival was my first real stop in Europe, so I'd just done a stupid international flight, then had a crazily early flight to Köln, had to wait around all day for my train, then... do that. It was stupid. I was sick and exhausted for the entire festival (BUT IT WAS STILL AWESOME). Next time, I'll be positioning it squarely in the middle, after a relaxing week in Italy. Maybe. I haven't decided yet. Also keep in mind that it's the middle of summer and you're in southern Germany so it gets hot really quickly. Nap throughout the day if you manage to find a cool place.

Drink ALL THE WATER and wear ALL THE SUNSCREEN
Buy a bottle at the festival grounds (if you're staying there) and refill that through the day. You can't take empty bottles onto the festival ground (but, for some reason, you CAN take sealed tetrapacks of juice (...)), so do the same thing there: buy a drink to start the day, then keep refilling that throughout the evening. Return it for your refund at the end of the evening and repeat the next day. The acts don't start until 15-17:00, but it's still pretty hot, and the sun doesn't set til 20:00 or 21:00; one act had to do an almost acapella set because the sun pretty much melted their drums. On that note, I don't know why I didn't bring sunscreen but I didn't (idiot), so do that, stay out of the sun, consider wearing a hat during the day that you can then fold up and store in your pocket as night sets in.

Get a locker at the festival
There's a portable locker van just outside the festival grounds which is really cheap; get one. I kept my wallet, passport, and some of my travel stuff in that, and just took my phone and cash into the festival (there's also an ATM right next to the lockers, so you can get cash out easily).

Go for a swim
Ferropolis is right on a massive lake, so get your valuables in a locker and then go for a swim. The water was beautifully cool and I'm pretty sure it's the only way I avoided heatstroke.

Charge your phone in the toilets
This was the worst part of the whole experience. They do have charging stations at a few places across the campsite but, of course, they were always full of people and, sensibly, in direct sun. Yeah, that's a winner. Instead, I had to sit in the (gross, filthy) toilets for an hour waiting for my phone to charge (because you can't just leave it there and trust no one will take it). On the other hand, no one else seemed to realise that it was there, and it's nice to have an hour to just sit down in a covered area. Alternatively, don't use your phone for 3 days.


Small bag is best!
This is sort of just a general travel tip. You don't need a huge checked bag; take only essentials and fit it in a carry-on bag (I got this bag from Kathmandu, which was a perfect size; it's also really nice to walk straight off a plane and not have to wait around for hours for your bag to come out). If you're camping or doing the MiXery train, you'll need to do this anyway as there's very little extra room for luggage storage. Remember also to get a locker to store your valuables.

AND OF COURSE
As tempting as it is to get wasted on the substance/s of your choice, you'll be tired and dehydrated enough as it is. And, hey, if you need to get high to enjoy the music, you probably aren't there for the music, and getting there ain't cheap. I probably spent €40 a day on food (sometimes more because dancing makes you hungry and also SUCH FOOD); if I'd also had alcohol, that probably would've been more like €100 or €150. My bank account is still sending me love letters.

Oh, also, don't get sick, cause I was the entire time and it sucked more than you can ever know.

All of that aside, attending Melt! is among the best experiences I've ever had. I got to see some musicians I never thought I would, and I finally went to a festival I've dreamed of attending since I was in my early teens. Fingers crossed I can go again next year.

This is the first in a series of posts about my adventures overseas in the middle of the year. Next up: Berlin!
Posted by James at 13:23