I'm a little bit in love with fermented foods. I think most people think about fermented foods as this freaky, rarely eaten subcategory of foods, made and consumed only as part of some ancient feasting ritual. But think about it: cheese, wine, tempeh, soy sauce, vodka, yogurt (not to mention many breads)... all fermented, and all delicious! We're surrounded by fermented foods, and rarely give it a thought.

Admittedly, by the time many of these foods reach us, they may as well not be: they're pasteurised, or stored for so long that the culture just gives up and dies. But it certainly makes eating "fresh" fermented foods (or "alive" ones) a really incredible (and all too rare) experience.

I heard about Sasakani Kobo Organic Miso when they dropped some samples into The Green Edge. I emailed them to find out more about them and, as luck would have it, they were having one of their Miso Club events on the coming Sunday. I quickly booked two places for Matt and I, and waited with much anticipation for Sunday to arrive. When we arrived, we were greeted by Scott, and were invited into the living room to meet Mayumi, the brains behind Sasakani Kobo's miso, and the other attendee. Due to the size of their living room, the meeting was limited to four people (the fourth person was unable to attend). 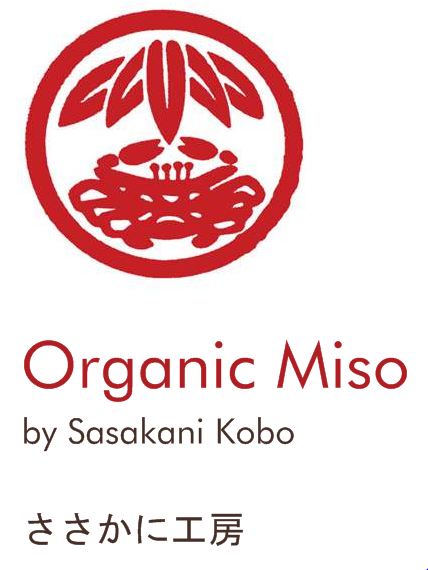 Sasakani Kobo (the name, and the logo they have employed) are in fact that of the natto and tempeh shop started in the mid-1940s by Mayumi's grandfather in Japan. A great lover of fermented foods, he traveled to Indonesia to learn how to make tempeh, though it did not seem to appeal to Japanese people back then. He continued to make natto until two years before he passed away in 1996.

All of the equipment was locked up in a small workshop behind Mayumi's grandparents house and, essentially, abandoned. Then, just a few years ago, Mayumi and Scott, visiting Mayumi's Aunt (who now lives in the house), decided to rescue what was left of the business. They took some material, and her grandfather's research and recipes, back with them to Australia and began to make their own fermented foods. After two years of experimentation and a number of test batches (no mean feat, considering that most batches must ferment for at least 6 months!), they decided to start sharing their love of miso with others, and Miso Club was born.

I had absolutely no idea what to expect (other than miso!) from Miso Club, so I was delighted to discover that it this was no simple tasting: this is a full-on, miso-loving experience.

Mayumi began the "meeting" by explaining the various types of miso, while we sipped on cold brewed, Australian-grown sencha. I was very surprised to discover that hatcho miso (miso made only with soybeans), while the "default miso" here in the West, is rather uncommon in Japan, and is only used around the centre of Honshu, while areas to the North generally use Rice miso, and further West/South generally use Barley miso. She then briefly outlined the nutritional benefits, and how miso is made.

We were then presented with a plate of 8 different samples of miso (all made by Mayumi and Scott). Five of these were "plain" miso (white rice, brown rice, barley, and a mature and a young "mixed miso" (made with a combination of rice and barley)), while the other 3 were flavoured misos (Korean miso, or gochujang / kochujang, a herbed miso, and a miso spread (tahini and miso)). As well as being unpasturised, Mayumi also does not process the miso, so pieces of rice or barley give it some texture. Furthermore, apart from some of the ingredients in the kochujang, all of the misos are made with locally grown/harvested, certified organic ingredients.

My only previous experience with miso has been with the prepacked kind available at Coles or Woolworths, so I cannot even describe how unprepared I was for trying all these different types. Each had such an incredibly distinct flavour, full of wonderfully rich umami: sweet, and yet earthy. I was too embarrassed to go back for seconds (though it was very tempting!). I did manage to sneak seconds of the kochujang, though (the one we have at home from an Asian grocery store has high fructose corn syrup as the second ingredient; needless to say, they are incomparable).

The kochujang was my favourite, followed very closely by the brown rice miso and then the young mixed miso: Matt's were the mature mixed miso, the white rice miso, and the miso and tahini spread. 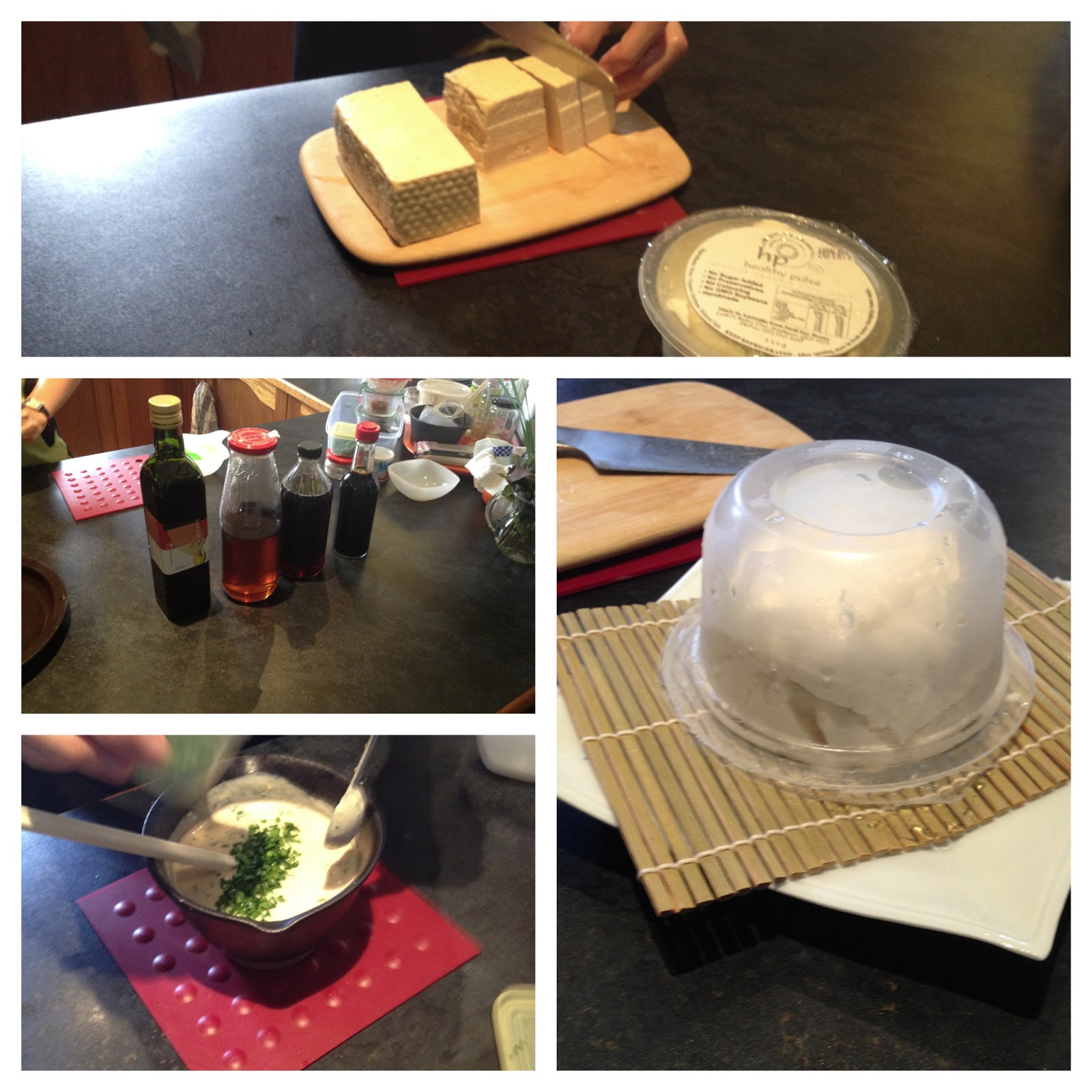 We then moved to the kitchen. Somewhat unsurprisingly, Mayumi also loves tofu, and talked us through several different brands and styles, including one made locally on the Gold Coast by Healthy Pulse (available at Genki Mart). Following this, we were treated to a full demonstration of how to make each of the dishes we were to have for lunch, all of which (of course) featured miso in some way.

Before we knew it, it was time to eat. We were presented with three dishes: chilled fresh tofu with "colourful toppings", peanut and tofu nibbles (wrapped in mulberry leaves), and buckwheat soba noodles with creamy miso sauce (topped with chopped vegetables and toasted nori).

Everything was absolutely wonderful: a perfect balance of agedness (from the miso) and freshness (from... well, everything else!), with the beautiful simplicity of Japanese-style presentation. I think I went back for thirds of the soba noodles (and nearly licked my bowl clean to get every last bit of the delicious sauce).

Just before dessert, Mayumi disappeared for a moment, and returned to the table bearing container of some curious-looking brown beans. Ah ha! Scott and Mayumi had been threateni... um, promising to share some fresh natto with me over email, and here it was at least! I had heard the horror stories about natto (as most have), so I was extremely anxious to try/about trying it. Though I was the only want to seemed to want to, finally the other two relented and we were each given small bowls of the strange, sticky beans.

We all looked nervously at each other, then took a small spoonful. 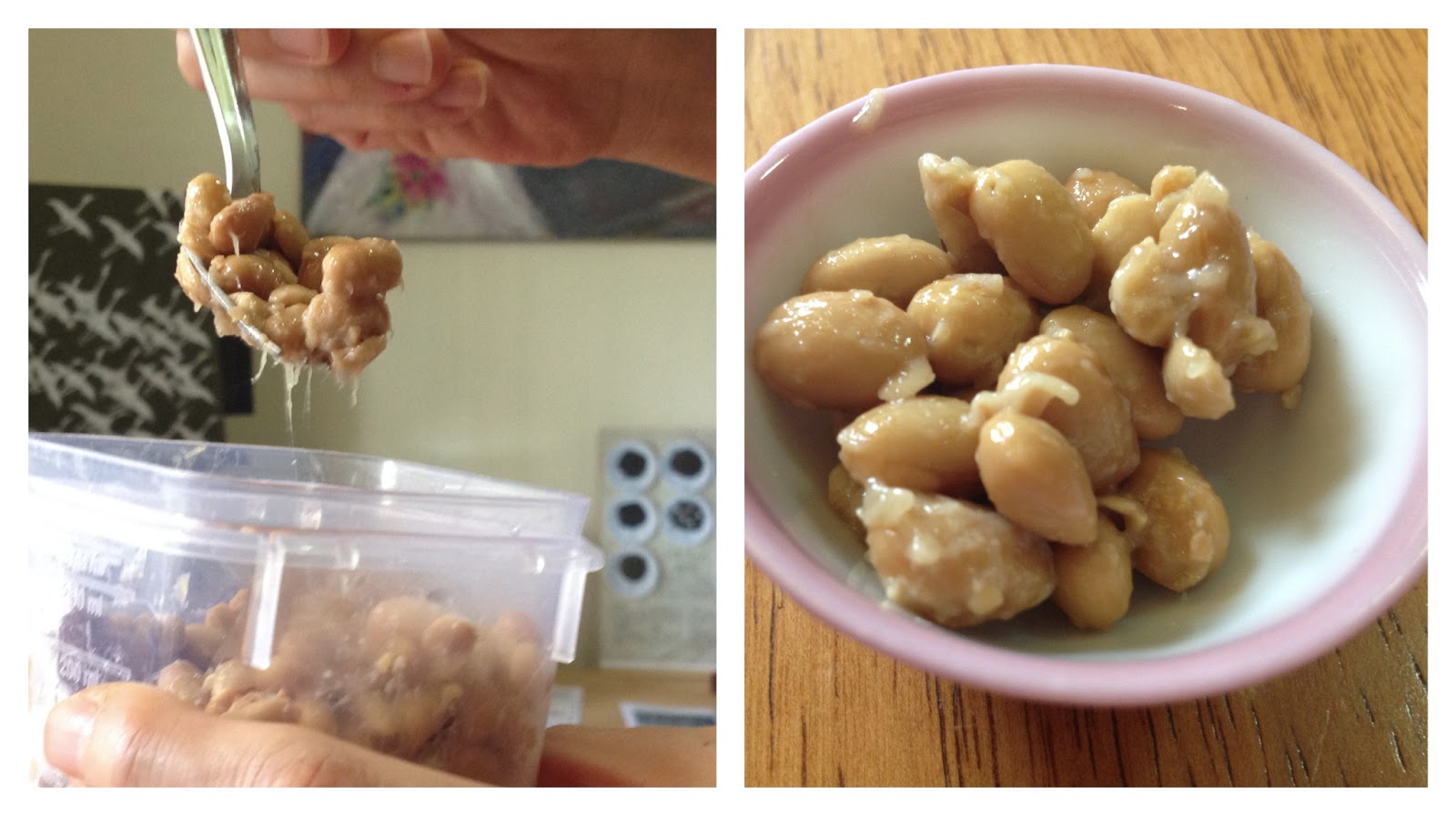 I'm sure Scott has some horrific photo somewhere of the look that took over my face. I think my thoughts were something like: "Murky... no caramel... carob? WHAT'S THAT oh just more beans... sticky sticky WHAT IS THIS?!?"

I have eaten some interesting things, but natto certainly takes the top spot. I'm certainly glad that my first experience was with the home-made kind, not the strange (overly goopy, by the looks of them) ones from Asian supermarkets. While I'm not sure that I would pick it off a menu, it was nothing like the stories I'd heard ("oh my gosh it was so SLIMY and STICKY and I could barely eat it"): instead, it was creamy (the tough soybeans reduced to a smooth paste by the strong starter) and had carob-y notes. Certainly something you have to experience at least once!

At last, it was time for dessert: a green tea ice cream. A tad icy, the creamy coconut milk gave the green tea richness (rather than (as with many such ice creams) blasting the delicate flavour away with too much sugar). As a testament to the whole afternoon, the "meeting" ended up going two hours over time, simply because we couldn't stop chatting!

Mayumi and Scott hope that running these events will allow them to grow Sasakani Kobo (and so have their miso available for sale in the not-too-distant future) but, also, to allow people to experience miso at its finest.

No matter who you are, I have one word for you: GO. It was an afternoon of education, delicious food, wonderful company, and absolutely outstanding miso. The next event, on April 14, will be a miso making demonstration. Email them now to book a place so you don't miso out (because I will fight tooth and nail for my place!). Their contact details are below.

If miso making doesn't sound like your thing and you'd rather experience a regular miso club meeting (as described above), there will be another in June (but email them now to get on the list!)

In order to be notified about future Miso Club events, either email Scott and Mayumi [sasakanikobo (at) gmail (dot) com], or follow MisoScotto on twitter and DM him your details to be added to the list.