After a long day in the sun, traversing the West End markets, hitting the pavements of the city in search of endless music stores (and finally coming upon what I sought - a brilliant, haunting 1978 album by Carly Simon, called "Boys in the Trees" - and at $5.98 at JB Hi Fi, who could complain), I came home, with the same feeling that I'd had when I set out: a desire to languish in the sun. But who could last in this heat and humidity? Certainly not me. I found my way to a spot right underneath the air conditioner. 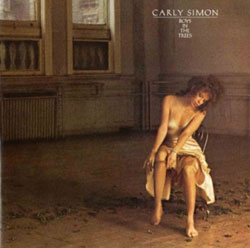 This evening I really wanted pizza - but, that old chestnut many vegans are familiar with popped up: unless we're talking in strictly authentic terms (minimalist toppings, fresh ingredients, and heavenly, slow-risen base), no pizza is ever as good as what I can make at home.

With The Green Edge moving, and having a 30% off sale, I'd picked up one of the few vegan meats I enjoy - Redwood Chicken, and was longing for a way to combine it with some of the mushrooms I bought this morning at the markets, while using up some of the antipasti I had jarred and bottled in the fridge. I'm lucky that I have some great stand-by herbs in the garden outside, also.

Let's be honest, I felt like pizza (don't I always?), but I didn't feel like the long oven time, the flour everywhere, the rising, and the other fun that really is essential for good pizza. So I decided to make a saucier version of what I wanted in a pizza: something savoury, meaty, rich, saucy, oily, and lip-smacking. And I wanted it all in one skillet/frypan.

Here is what I made. Ultimately, you could have this over pasta (or even rice... if you're that way inclined). I think it's hearty and saucy enough that it's almost too delicious on its own. This is pretty free form - adapt to your tastes. Apologies, as always, for the complete lack of food styling/food photography skills. I'm just a dude, in many ways. 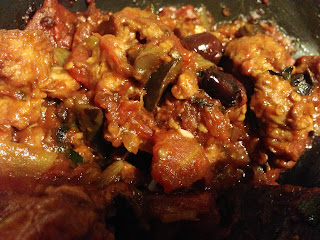 Heat some oil in a pan (I'm trying to be arguably virtuous and use coconut oil, but good quality olive would be more traditional).

Method:
Sauté Onions, until translucent.
Add mushrooms, and saute until their liquid is released, and they are soft and lightly browned.
Sprinkle some salt, to taste.
Add protein (i.e. tempeh, seitan, or vegan meats such as: sausage, chicken, or pork) and brown.
Push the ingredients to the side of the pan, heat some more oil on the clear space.
Add garlic to the oil. Fry for 30 seconds.
Add tomatoes.
Add salt, to taste, and simmer for approximately 5 minutes.
Increase heat to high.
Add red wine (a sweeter variety is perfect), and cook to evaporate the alcohol off and to reduce and intensify the sauce for a couple of minutes.
Add chopped antipasti: I used kalamata olives, grilled marinated eggplant, and sun-dried tomatoes, in descending proportions.
Simmer for 10 minutes.
Add chopped fresh basil and oregano (if you're using dried herbs, use 1 teaspoon and add at the beginning, when the tomatoes are first added).
Simmer five more minutes, or until sauce is at desired reduction and thickness. I like it quite thick, not liquid, but coating. Beware, the thicker it is - the more concentrated the flavour.

Season to taste, and serve. If you have creamy cashew cheese nearby, a dollop on top is lovely, alongside a couple of fresh basil leaves. 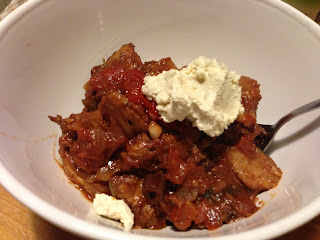 Enjoy, either alone, or with pasta, or bread.

Film:
I watched the film "To Die For" while I ate this - a 90s indie thriller by Gus Van Sant, starring Nicole Kidman (back when she had a personality and an ability to move her face to portray emotions), as what I can only describe as Lana Del Rey, before the fall of the American Dream. Also starring were a young Casey Affleck, a young Joaquin Phoenix (all the vegans!), and Matt Dillon. Worth a watch for the insight into some people's insanely ambitious drive towards success, and adoration being used to twist and manipulate, but far from excellent. It's sad that we're so accustomed to insanely soul-less young people these days (they do saturate our media culture, after all), that when we see similar stories now, they're far from shocking. Some of the pop stars of today could give Nicole Kidman's character a run for her money, on a daily basis. 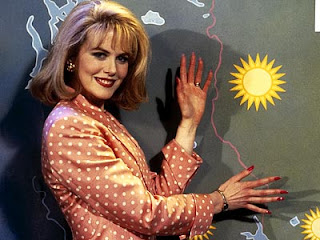 Bonus:
Vegan with the lot, from 5 Dogs Gourmet Hotdogs in Fortitude Valley. The facon isn't to my tastes, but the bizarre combination of sauerkraut, jalapeno, cheese & olives with german ketchup and hot dog were a winner for me, all wrapped in a soft bun. 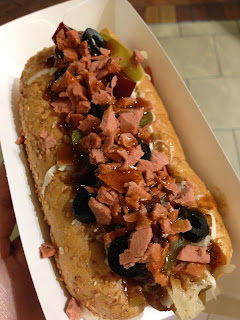