Last night, I attended the Brisbane TwEATUp at Cabiria Wine Bar at The Barracks on Petrie Terrace. Matt decided to stay at home, as he is a tad disillusioned with dining out (and if Matt's disillusioned, I'm trying to be the optimist!). 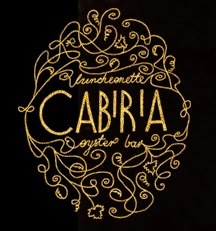 Cabiria is the sister to Peasant, also at The Barracks. Set in the old red brick of the Petrie Terrace barracks, the outside dining area, where we ate, is encased in roughly hewn wood, dimly lit by antique-looking glass lamps (see the photos on their website). Facing towards the restaurant as I was, it was difficult to believe that there was a Coles, and a main road, and Caxton St, some 50 metres away.

I had let the restaurant know in advance that I was vegan, and raved (just a little) about how excited I was to try their famous gnocchi. Unfortunately, I soon found there was to be no gnocchi for me. And... deep sigh.

My first course was a fresh fig salad with dried figs and fig preserve. I've never been the biggest fan of figs, but was glad to be having the fruit at the start of the meal! To my surprise, the dish was delightful: as much as I hate the novelty of "X done 6 ways!", it's dishes like this that really show why such a method became so trendy in the first place. The fig preserve was especially wonderful. 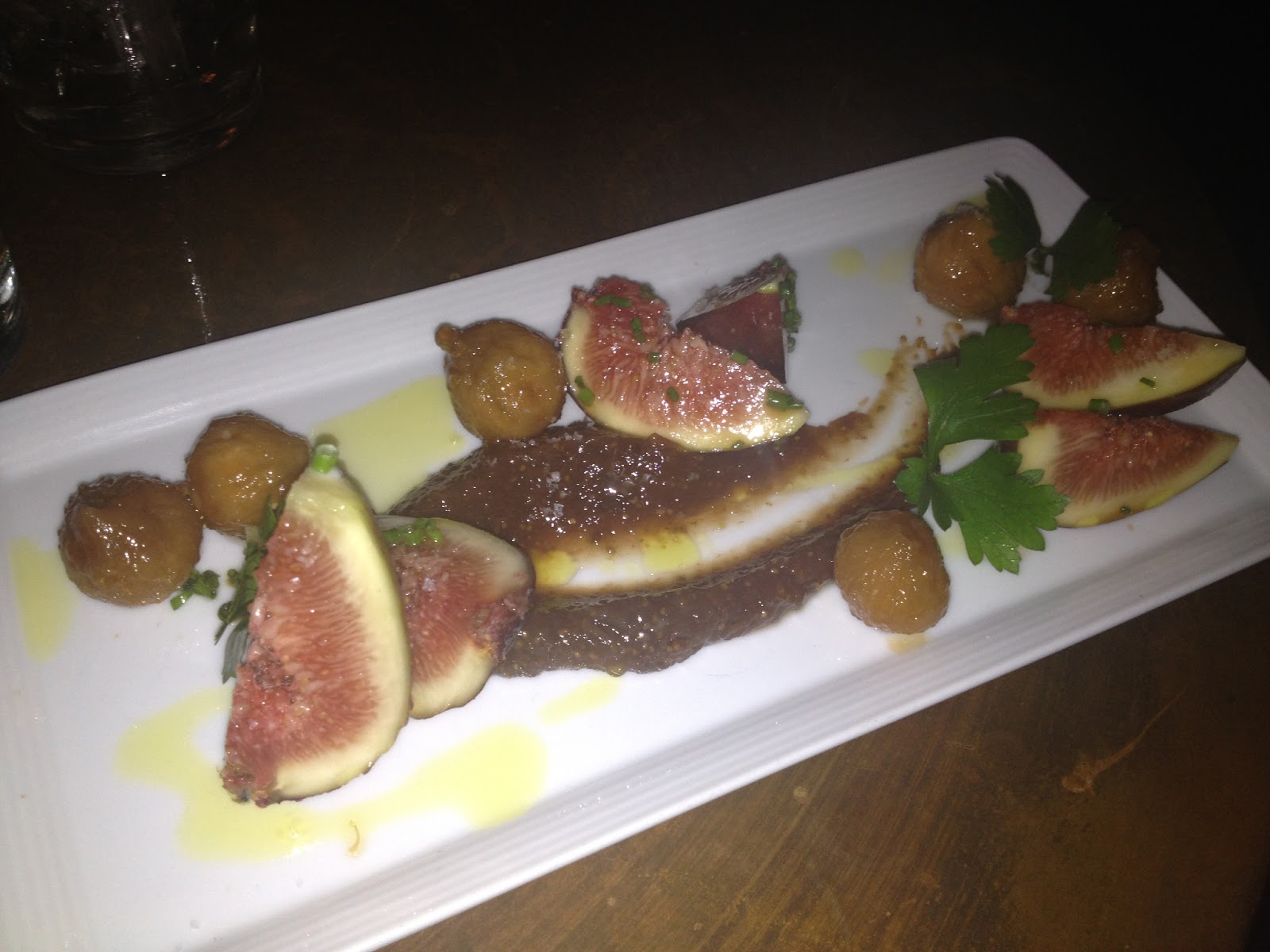 Secondly, I had roasted baby capsicum stuffed with smoked eggplant and topped with breadcrumbs. The capsicum was a tad bitter, though this may just be that I've only ever liked red capsicum. Otherwise, the smokiness of the eggplant paired wonderfully with the lightly charred capsicum. 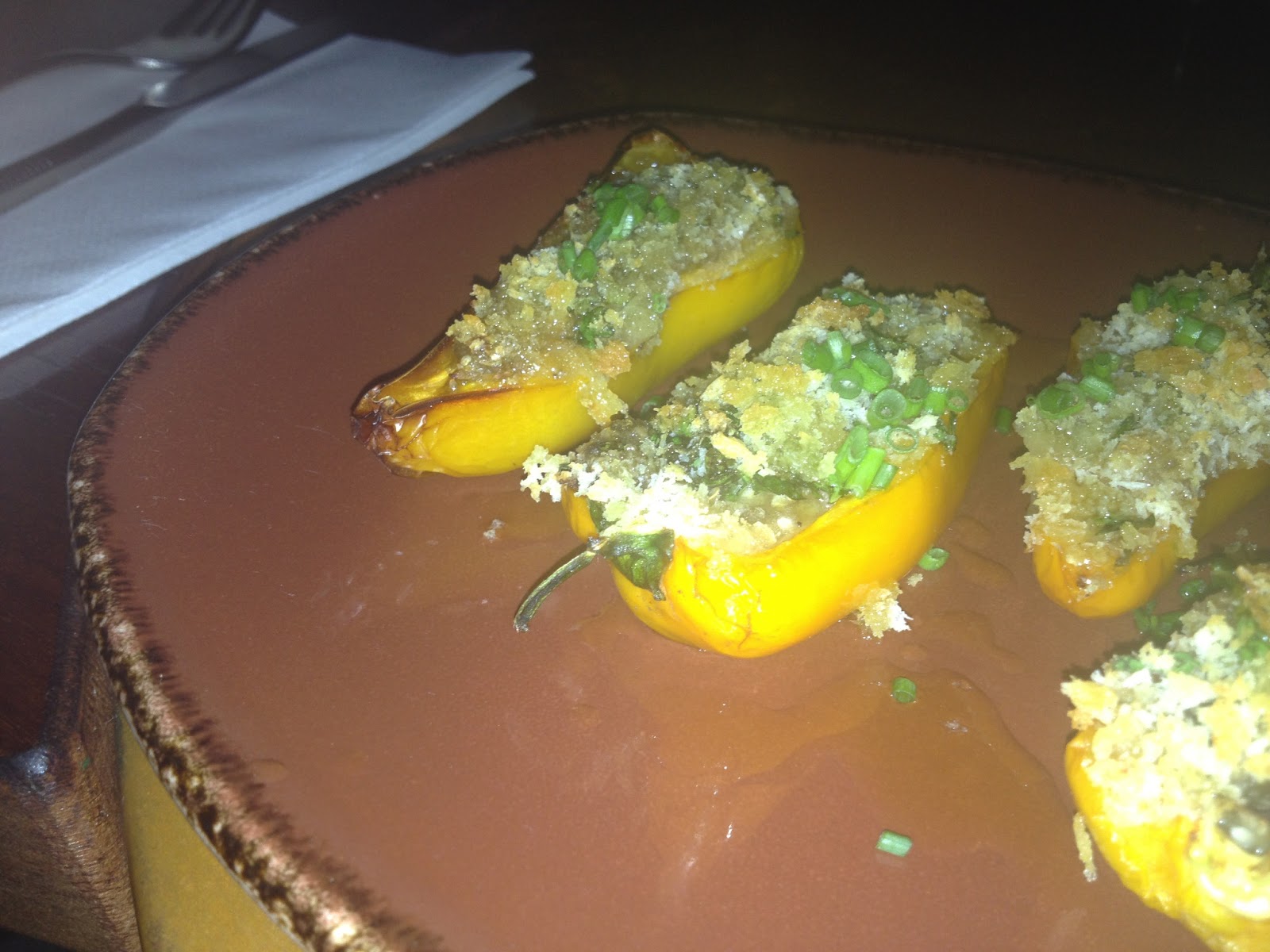 My final entree was an heirloom tomato salad with truffle salt. Simple, yes, but how can one go wrong with tomatoes and basil? 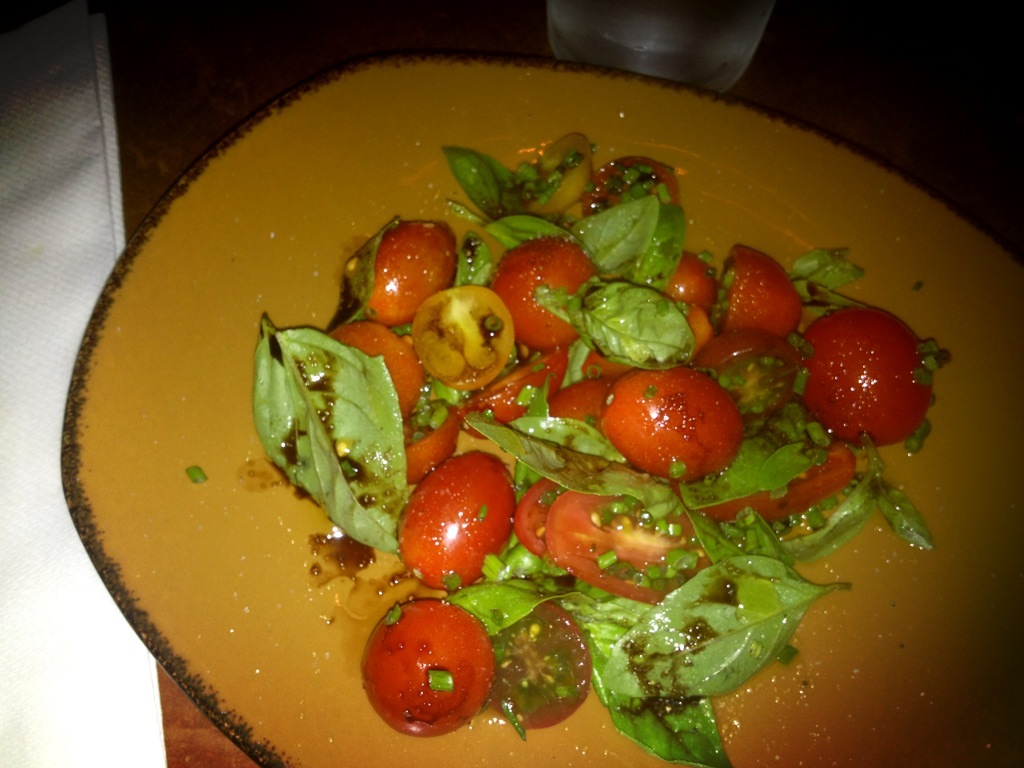 My main was a potato and porcini lasagna. Probably because their pasta has egg in it, the potato was used in place of the pasta. The dish was very hearty (thankfully!), though I could have done with another 2 or 3 (especially as the others had several more entrees and mains, though they did share)! The potatoes probably could have done with being roasted (or even just salted) before being layered as the "pasta", as the large stacks of potato became rather bland and took some flavour away from the dish. I was very impressed with the ingenuity of the chef, though, and was glad to have a hearty main. The porcini layers were really flavourful, and I don't think the pot would've needed much of a wash after I was finished with it! 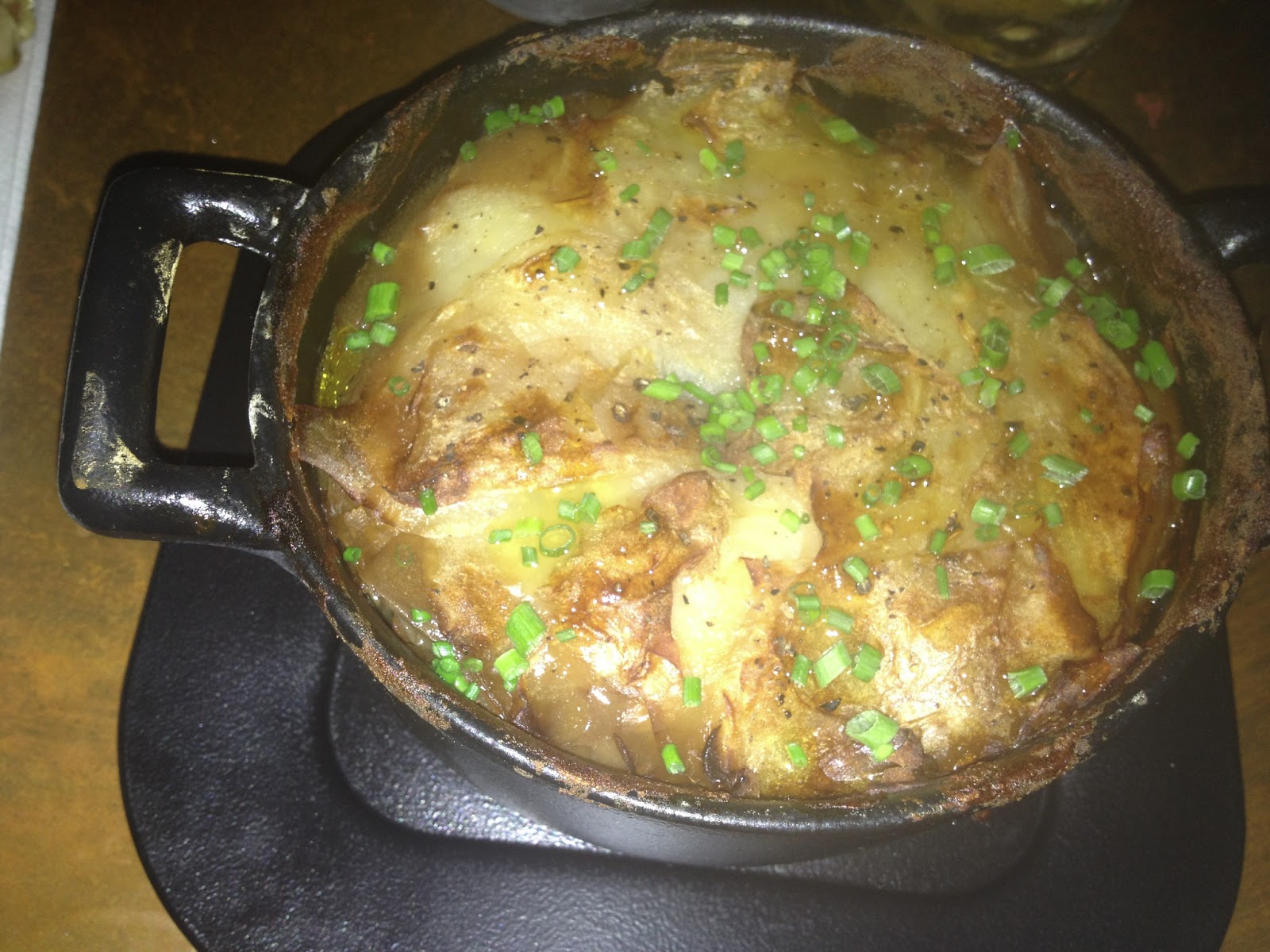 My dessert was crepes with raspberries. OH MY GOSH IT'S NOT FRUIT SALAD. It was, indeed, delicious, though I did feel the raspberries were much too tart in comparison to the very sweet sauce, and the presentation of the dish was seriously lacking. But I give full points to the chef for thinking beyond... well, fruit salad. It was a lovely way to end the meal (and, I'm somewhat ashamed to admit, I ended up tipping the plate so  could get every last drop of the sauce onto my spoon and eat it!) 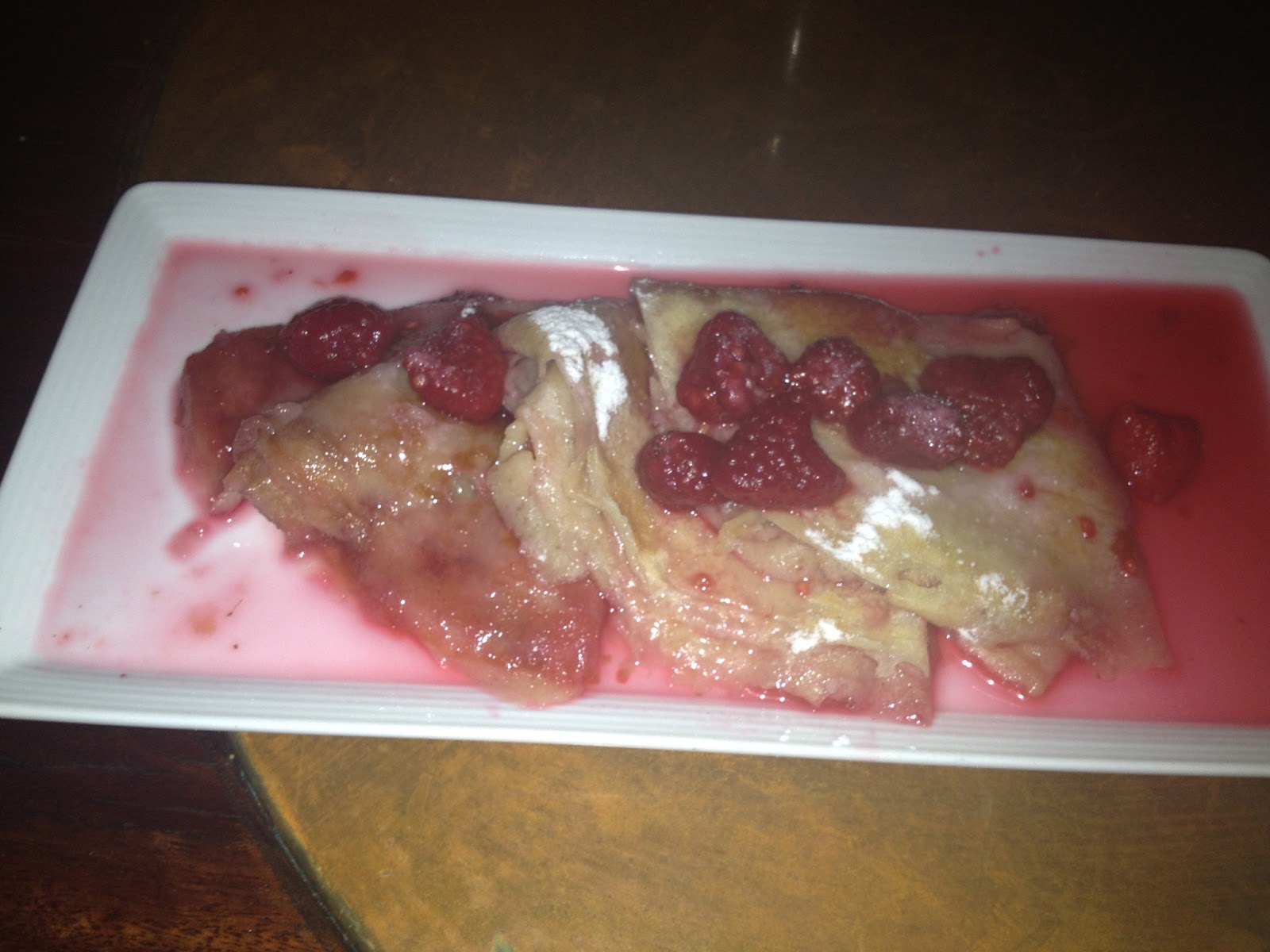 My one confusion with the meal was the egg factor: if I was able to be made crepes without egg, why not gnocchi? Or pasta, for that matter? (neither of which need eggs). It should be noted that it was pumpkin gnocchi, so perhaps in that case egg was needed to bind, though a potato (or sweet potato) and pumpkin mix would have been wonderful! Anyway, perhaps in future.

I've noticed that I have a skill of sounding very critical and then ending with "But, anyway, I enjoyed it", and this is no exception. The atmosphere in the restaurant, the care that the chef had taken in coming up with inventive food (when he could have just given me salad, salad and... salad) and, of course, the company really made it a wonderful evening.

Matt was very jealous that he didn't attend, but I would very happily return (hopefully for gnocchi!) I should probably also note that they have a fantastic selection of cocktails (though watch out for the martini, which is served with (I'm sorry to say) a foie gras stuffed olive), and have over 300 wines on their wine list (around 30 by the glass, a similar number by the half bottle, and the remained by the bottle). And, best of all, their espresso martinis can be made with either vodka, tequila, or rum (Mount Gay rum which, though I'm not a rum drinker, is quite extraordinary).

Thank you to TwEATUp Brisbane for organising the evening, to Cabiria for having us, but especially to the chef, for making an effort for me. It means a lot.