My Favourite Things 2012: The Academic

It's that time of year! Originally, we intended this to be a series of posts, but instead we're going to be a little more like Oprah than I'd like and just do a list each. But there's no giveaway, so our hipsterdom is, like, totally safe.


Culinary Highlights
The absolutely culinary highlights of this year are, without a doubt:
My birthday dinner by Kym Machin (at Spring): This was one of "those" meals, that you hold onto the memory of forever. Absolutely unforgettable, absolutely incredible.
Swirl, Sniff, Spit: WE HAD A WINE THAT TASTED LIKE A SEASIDE DELI. Need I say more? Well, I will anyway. Get thee on the twitter and go along to one of these shindigs: even if you think that the wine-tasting is wanky and pointless, this will open your eyes to the incredible world of wine. But take along money for a taxi or your goCard, unless you really think you'll spit every mouthful.

Off-The-Shelf
If you're a tempeh hater, it's clearly because you've never tried Mighty Bean Fresh Local Tempeh. The "best before" date marks 21 days after the tempeh has been made. TWENTY ONE DAYS. They also make a "Long Life Original" tempeh, and an "Oriental Stir Fry" tempeh. Made on the Sunshine Coast, Mighty Bean have a stall at the Eumundi Markets but if you're not willing to brave those (I'm still trying to build up the courage), their tempeh is available at Pod Organics & Wholefoods in Stafford (4/275 Stafford Rd; on Crawford Avenue, just off Stafford Road, next to the Drycleaners) and The Green Edge in Enoggera (2/191 Wardell Street; in the building with the pink sign with a bikini girl on it and next to the church, across the road from the Caltex and K&K Toys). I'm not sure of where else it is available, so let me know if you know of anywhere. 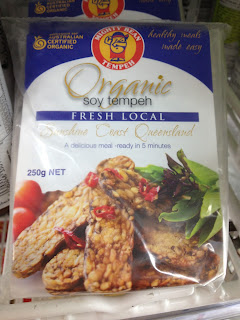 Similarly, tofu-haters: get thee to a health food store/small grocery store and I'll even give you a choice this time: Earth Source Foods biodynamic tofu is the.most.delicious tofu I've ever had (ok, maybe a close second to homemade). They milk  pressed, soft, firm and silken tofu (I have tried the latter two, but not the former, though I imagine they're all as delicious). Get on it, it's amazing. Available at pod organics, The Green Edge, and Wray Organic (stores in: Palm Beach, Newmarket, Indooroopily, Ipswich, Cannon Hill, Toowoomba, Cleveland, and Mt Gravatt). I imagine they're also available at many other organic grocery store, so ask at your local (and let me know!). Second place goes to the slightly more widely available Blue Lotus tofu: their Premium Silken Tofu is my favourite silken tofu, and I could quite honestly eat it straight from the box (and I sometimes do). They also make a delicious firm tofu. To my knowledge, they are at most Coles, and may still be at your local Woolworths (if they haven't stripped the shelves of all but their own...), and are also available at many smaller grocery stores and health food shops. 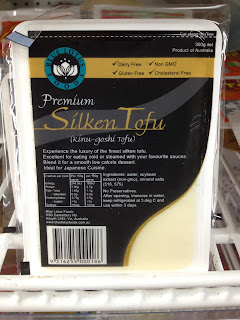 Books
Good thing I waited until after Christmas to do this! Matt got me Andrea Nguyen's "Asian Tofu"  for Christmas and I'm ridiculously excited about it. I do love "The Book of Tofu", and it's still an extremely detailed, information book (and it's about $8, so if you love tofu, GET IT!), but it can be a bit inaccessible. I made tofu following the instructions in the book today and it was absolutely delicious. Once I get my hands on some gypsum, I'll be making silken tofu and all sorts of other magic!

Of course, this was also the year that saw the release of Miyoko Schinner's "Artisan Vegan Cheese". I have loved experimenting with this book, and though it has been a bit hit and miss, the concept is absolutely fantastic, and finally gives some legitimacy to non-animal-based cheeses. I can't wait to have more time (ha) so I can explore even more of the book (and we got a wine fridge for Christmas, so we'll be able to do air-dried cheeses despite the horrendous humidity!

As horrified as I am to admit it, I only had time to read one fiction book this whole year, which was Jasper Fforde's "The Woman Who Died A Lot". Though the Thursday Next series now feels it's being stretched a little too far, I still cannot wait for the next, nor for the final Nursery Crimes and Shades of Grey books.

Music
It's really odd to pick favourite music from this year, not least of which because I completely forget about all the albums released at the start of the year, but also because 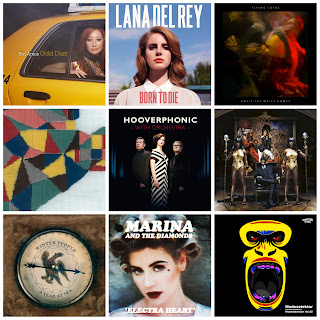 The Mixed Bag
Flying Lotus' "Until the Quiet Comes" was one of the albums I was most excited about, but after its release, I wasn't so sure. Azealia Banks' "FANTASEA" mixtape was excellent in parts, but a bit same-ish in others (and boy does she have a mouth on her...). Lana Del Rey's "Born To Die: Paradise" was better in some ways than the original album, but also lacking in other areas (though I can't agree with some of Matt's review!), and "(III)" seems to indicate that Crystal Castles have said all they had to say (which is a bit of a shame). Madonna also showed us... well, that there's nothing else to show, really (ironically enough, the same thing could be said about Goldfrapp's "The Singles", which included two absolutely uninspired "bonus tracks"). At least she picked a more appropriate cover this time around. And Marina & The Diamonds showed us that she's quite happy to sell out and make Top 40 music, but only if she's pretending that she's not. Scissor Sisters released an album that feels like their second, if only because we can't remember the two they've released since their first; though there are some fun songs, they have never been quite able to capture the diversity, and interplay of drunken fun and heart-breaking sobriety, that made their first so great. And don't even get me started on Fiona Apple's latest...

On a middle-ground note, I also discovered Flume, whose self-titled album was released this year. One of those "omg I've discovered this awesome artist" and then you go to JB and you realise that they're really popular and everyone already knows about them and, once again, you're back to indie points: 0. I really enjoy parts of the album, but ultimately, it seems like a promise of great things to come. I'll be keeping an ear out.

The Great Moments
Gossling's new EP "Intentional Living" was pretty much all I listened to for a few months, and seeing her live was absolutely fantastic (if you ever get the chance, make sure you do it). She was supported by Winter People, who released their album "A Year At Sea" a couple of months ago.
Sutrastore, whose EP "Love Evolution 1.0" was a favourite of mine a number of years ago, finally released their first album "Open Doorway", which unfortunately only got a digital release.
Modeselektion at last released "Modeselektion Vol. 2", which (in my opinion) far surpasses Vol. 1, with a much darker overall sound.
I loved Hooverphonic "With Orchestra" simply because it was great to see them testing Noémie on some of the older material (which she passed with flying colours, though I would've liked less from "The Night Before" and more from the rest of their career!). They have also recently release it as a live CD/DVD, which I have ordered, but am yet to receive (fingers crossed it'll arrive soon!).
On a similar tack, Tori Amos released "Gold Dust", an orchestra re-imagining of her greatest hits, as well as a few surprises (unfortunately no new tracks). As much as I never, ever need to hear "Silent All These Years" again (and would've liked something from "To Venus And Back" or "The Beekeeper"), it's a really wonderful listen, and fantastic to see a truly great artist back to doing what she's best at: performing.
Santigold's "Master Of My Make-Believe", though more muted than her debut, also has some great songs.
And, despite the mixed bag of "Paradise", there is no doubt that Lana Del Rey's "Born To Die" is one of the best albums (even if some of the music only survived due to a strong concept) of the last few years (though combining the EP and album and cutting some tracks would have resulted in a stronger album overall, in my opinion).

Tracks of the Year
Grimes' "Genesis" (from her album "Visions") is an absolutely brilliant track, though the album as a whole failed to have much of an impact. Ladyhawke's "Girl Like Me", the first track from her new album "Anxiety" is also great (though, again, the rest of the album is somewhat forgettable). Flying Lotus' "Electric Candyman" (featuring Thom Yorke) is certainly the highlight of an album that, to be honest, was always going to feel like a letdown after "Cosmogramma". The Winter People's "The Banker's Lament" gives me goosebumps every time I listen to it. Hot Chip's "Flutes" and "Night and Day" are also excellent.


I don't really feel that I've done this year justice, but goodness knows if I wrote about EVERYTHING that we'd done and that I'd like this year, the post would never end. Keep an eye out for the Dilettante's list, which should be posted soon!

To everyone who reads our blog: THANK YOU. Firstly, for your patient with our somewhat erratic posting, and seconding for your support! We're working on a few interesting things at the moment, which we'll hopefully share in the new year.

We hope you all had a very Merry Christmas and have an extremely happy New Year, however you chose/choose to spend them!