After going to our favourite haunt the other night with the ever fabulous Jane, we were feeling a little peckish so, after walking Jane home, we decided to get some pizza. One, we got from a pizza chain, the other from a restaurant/bar-style place. We won't even go into how awful the pizza chain veggie pizza was, as it was what I had expected, but what I hadn't expected was that the restaurant/bar-style place's pizza would be as awful as it was! I ordered a potato and rosemary pizza (hold the parmesan) and what came out was a dry cracker with about 10 pieces of potato.

I know potato pizza is a bit "done", but I still think it's delicious (because it is), so the next night I made us one for dinner. It's super easy, really tasty, and doesn't require chopping heaps of veggies! (and, though we often forget with what we're charged at restaurants / take-away places, very inexpensive) 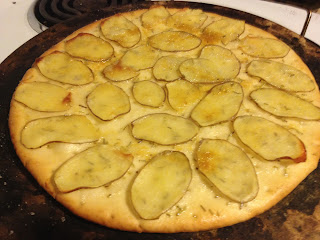 
Store-bought pizza bases tend to turn into cracker when cooked, but sometimes you just need pizza NOW and don't have time to make pizza dough (we've all been there). Take a look in the fridge or freezer section of your supermarket for "fresh" pizza bases, which are already rolled, but are dough (unlike the dried bread disks in the bread section). Also take a look in smaller grocers, as they sometimes sell ready-to-go pizza dough (Sugo Mi sell them at their shops but also in other smaller grocers/delis), which may be unrolled, rolled AND ALREADY TOMATO PASTED (!!!) We're not using tomato paste on the base in this recipe, so avoid those, but they're really useful for other pizzas.


Utensils
Slicer (our grater has a singler slicing blade on one side which is a heck of a lot less painful than assembling/using/washing the mandoline, but isn't quite as wide so isn't particularly useful for larger potatoes; or, if you're really good at slicing potatoes really thinly, do it with a knife!)
Pizza stone
Bowl
Spoons (for measuring and mixing)
Pastry brush (if desired)

Now That You're Ready
1. Turn the oven on full blast. Put 2 tablespoons of nuttelex in a bowl and either heat in the microwave for 30 seconds, or leave on the oven while it's heating to melt it.

2. To the melted nuttelex, add 2 tablespoons of olive oil, around 1/2 teaspoon rosemary, and the garlic (if using powdered garlic, around 1/2 teaspoon). Check for how salty it is; remember this for later. (this will make enough for 2 pizzas, or 1 pizza and small garlic bread)

3. Roll out/place the pizza base on the pizza stone. Either using the spoon or a pastry brush (I always find pastry brushes to be a big hassle, especially to clean up, but use it if you like it), spread the nuttelex mix over the pizza base: while it should be focussed on the centre of the pizza base, get it all the way to the edge. Sprinkle a few pinches of nutritional yeast over the top.

4. Slice the potato using the slicer; one potato should be more than enough for one pizza. Starting from the edge, place the slices of potato in concentric circles on the pizza base until it's covered; it's ok for the pieces of overlap a little bit, but you don't want them lying on top of each other too much. If you have some slices left over, make some chips! Or just compost them.

Despite the photo below, I'd probably use a bit more potato, as they shrink slightly when they cook (this isn't so much of a problem when the base is larger, unlike the one pictured below). 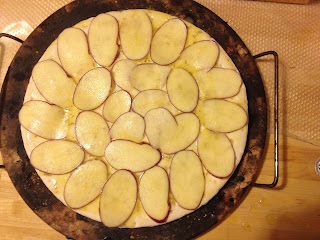 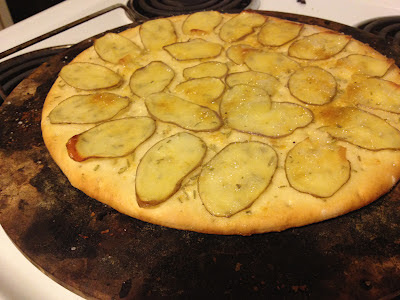