A few weeks ago, we had the great pleasure of being invited to a private cocktail tasting at the Limes Hotel, showcasing incredible-sounding drinks that they had developed to be served at the upcoming Alfred and Constance bar. 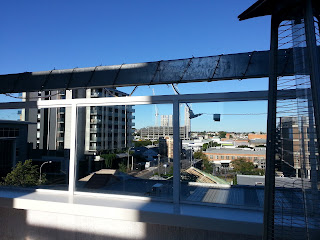 Free cocktails, on a sunny, breezy Sunday afternoon, on a rooftop bar on the outskirts of the city and valley.... I think you can tell what our RSVP was - a resounding YES! Alcohol, And canapes, hors d'oeuvres, whatever you want to call finger food - I'm happy to do the tasting. Thanks to the delightful manager Lucy for being such a lovely host, and for procuring vegan goods for us. 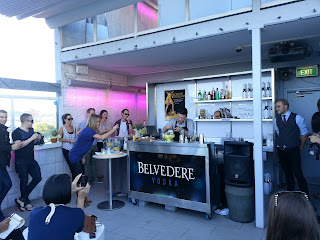 The Limes Hotel is a trendy little bar that can be a little tricky to find.. anyone walking past might just think it's another office building, or even an exclusive real-estate, but it's not! It's a Boutique Hotel and Bar, for the more discerning (and private) individual. They have a nice, relaxed, vibe - where you feel like you're part of the city and valley, but still away from the drunks and the 7/11s, and the cabs, and all of that nasty jazz you left behind when you were 20. 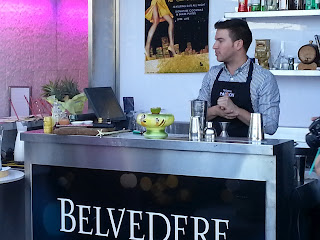 The reason for the tasting is that the owners of the Limes Hotel are opening a new venue called "Alfred and Constance", funnily enough - on the corner of Alfred and Constance streets, Fortitude Valley. It's going to be a funky little place - in a heritage listed house/es, with the focus being on a wood-fired oven. Sadly, a lot of those wood-fired goods aren't going to be things I'll be partaking in, but I do look forward to seeing their innovative ideas of vegan foods that can be showcased in the woodfired oven. I suggested pizza, but then again - I always suggest pizza (and who wouldn't? good wood-fired pizza, whilst few and far between, is an amazing thing to behold).
I've had so many bad cocktails in Brisbane. Terr-rr-rr-ible cocktails, even. At venues *known* for their cocktails.  I'm not even joking - at one very famous Brisbane cocktail venue, I was served a cocktail that tasted like reheated chicken. How is that even possible? So it was with much trepidation that I looked at our multi-cocktail tasting list. 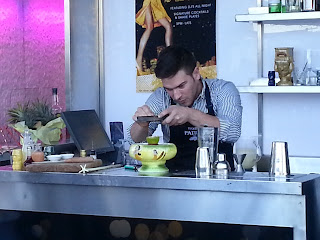 The cocktails we tasted were *incredible*. The knowledge and skill of the lovely bartender who made the drinks in front of us and described them, as we tasted ours, was so fascinating, and really helped us to understand what went into the cocktails. But they spoke for themselves. And they really were stunning. Seriously alcoholic, but seriously fun, and tasty.

The drinks expertly crafted for us were a Pina-colada, a Kava Bowl, a 1934 Zombie Punch, a Grapefruit and Agave Margarita, and a Sloe Gin Fizz. The Kava Bowl was the absolute best. Unfortunately, the Mayflower isn't suitable for vegans as it contains Aperol (which always tasted disgusting to me), and egg-white.


Of particular note were: the pina colada made on fresh, in-house, coconut cream, served in half a pineapple? Uh huh. And the "kava bowl", to be shared between 4, with a ridiculous amount of various rums that tastes like deliciousness, beaches, and toasted cinnamon? Oh, I do think so. I'll even grab the one sitting at the next-door table (just to make sure)...

Basically - Alfred and Constance is looking to create a "Tiki Culture" vibe. The way it was described to us is that Tiki was all about post-wartime enjoyment - the rations have been lifted, and it's all about going somewhere you can have fun, eat, drink, garnish to the max, relax, and drink up. It's all about fun. And I have to say - even at the tasting, I definitely was feeling the ambiance! 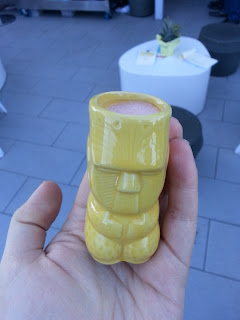 I look forward to the opening of Alfred and Constance with great delight - and do hope that it manages to be the classy, relaxing, non-snobbish oasis that it sets out to be. If it does - I'll be a regular! I look forward to delicious rum in its many forms. In the meantime, I'll keep hitting up the Limes Hotel for fantastic drinks and city/valley views.