On Friday evening, we attended a Chinese Gong Fu Tea Ceremony conducted by internationally recognised tea expert May King Tsang at t-licious, South Bank. It was conducted to announce the launch of the Friday Tea Club, a fortnightly meeting of tea lovers to be held at t-licious starting from next week. But more on that later!

Tea is, especially in the Australian context, not something we think much about. Most of us drink it, but, compared to the care that goes into choosing a restaurant, the right bottle of wine, or a place to drink coffee, our attitude towards tea is lackadaisical at best: we throw on the kettle, whack any old tea bag (whether it's Twinings, Bushells or (God forbid) Lipton) into a mug, then douse it in milk and... is three teaspoons of sugar too much?

By the time most of us drink tea, it has the subtlety of a shot of cheap vodka, and about as many flavours. OK, perhaps not vodka, but you get what I mean. Because of this, it's not surprisingly that the idea of a tea tasting seems extremely odd, if not downright silly. And, though everyone's heard of green tea, most of us probably don't know that the difference between black and white tea has nothing to do with milk (in fact, there's also yellow tea, oolong tea, and pu'erh tea (which also has nothing to do with milk)).

Until a number of months ago, I thought the same. But, through several conversations with May King, my curiosity was awoken, so it was with much excitement that I turned up a t-licious, not entirely sure what to expect, but knowing that it would be, at the very least, extremely interesting.

What is clear from the outset is May King's absolute love for what she does: as she talks, you're transported through the tastes and senses evoked by the tea, travel through the fables woven around this remarkably underrated leaf, from the mountains of Taiwan to a small temple in rural China and... suddenly you realise you haven't even taken the first sip.

Despite her expert knowledge, she is sure not to force what she tastes in the tea onto you: it's rather intimidating, but after a few moments of silence, someone chimes in “citrus”, then someone else “butter” and... well, perhaps it's suggestion, but you realise that the taste that was just on the tip of your tongue was butter, exactly, and somewhere around the middle was the hint of lime. One of the teas for me started off tasting like nothing, then as the air hit my tongue when I breathed in, suddenly I tasted butter, and lemon; about 30 seconds later it became avocado, and about a minute after that I could still taste macadamia. And that was after just one sip!

I would hate to ruin the surprise, so I will be brief in my description of the ceremony.

The dry tea we were to try was passed around, and we all smelled it. While we did this, May King “woke up” all the vessels with boiling water.

The tea is then brewed in a small clay pot; it is said that if you brew the same tea in such a pot for several years, one day you will add water and tea will come out. The second infusion is often considered to be the best, so the tea was brewed once, poured, then discarded, then water added again to the pot. According to May King, good quality leaves can provide you with as many as four infusions, sometimes more. 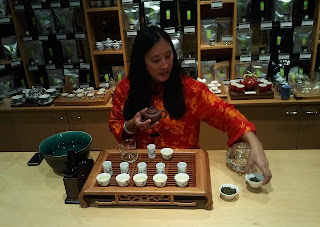 Once the tea is infused for a second time, the liquor (as is called the infused liquid) is poured into the sniffer cup, a thin cup that is used to (surprise, surprise) smell the liquor. The tea cup is placed on top and the two are flipped, pouring the liquor from the sniffer cup into the tea cup. Quickly, the sniffer cup is brought up to the nose, and slowly rolled between the palm of your hands as the essence of the liquor wafts out of it. 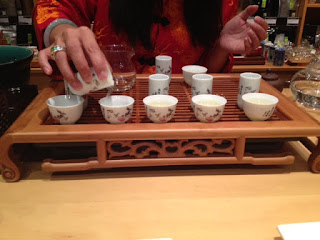 Only a small amount of tea is in each cup, but it's incredible the amount of flavour in what most of us, used to the dark brown liquid we usually call “tea”, would think looks quite weak. 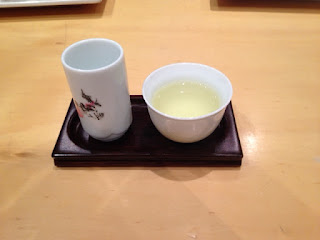 We only recently attended a wine tasting for the first time, and, though we all get something slightly different, it's remarkable to see how similar tastes people get from things which, really, shouldn't taste like anything more than what they are. I could go on forever about the embodied mind and community experience, but how two different liquids brewed from the leaf of the same plant produce such different flavours. And then, how can we all taste the citrus, or the butter?

Throughout the evening, May King happily answered the many questions we had, and shared her great deal of knowledge about, and passion for, tea.

If you're currently a tea lover, are looking to experience something new (and, hipsters, you'll be able to say you liked it before it was popular!), or just want to find out whether I really am crazy, May King's Gong Fu Tea Ceremony is a wonderful way of being introduced to the world of tea. You will be enraptured and engaged by May King as she shares stories of where the teas come from, how they're made, the origin of their name, and her love for this marvelous leaf.

The Friday Tea Club begins next week (11 May), and has three sessions:

11 May “Gong Fu Tea Ceremony”
Experience a traditional Chinese style tea ceremony, observe the art and skill of making tea, and experience tea like you've never had before.

25 May “Oolong Too Long”
Learn about the origins of oolong, discover why is has gained so much press in recent years and, most importantly, try some wonderful oolong teas!

8 June “Herbal Infusions / Tisanes if you please!”
Discover the difference between tea and herbal infusions, why these caffeine-free alteratives and proving very popular, and try some locally grown herbs and herbs imported from around the world.

So what are you waiting for! See tea in a completely new light, as you've never experienced it before. If you're unsure, grab a friend and learn together. You will not regret it. 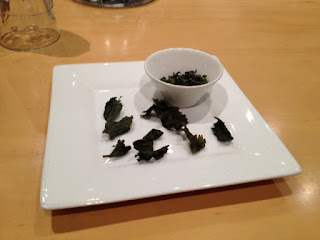