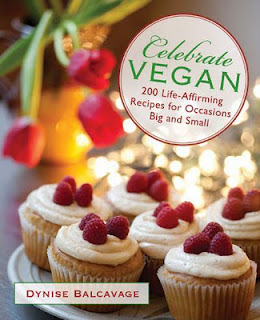 Don't make me rave any more about The Urban Vegan than I already do, it's embarrassing. Truly. I refer to her first book, "The Urban Vegan", regularly in my kitchen and whenever I pull it down from the shelf, The Academic starts salivating in mid-air (cue amused look from the cat). From her first book, you can't go past her 5 minute microwave satay sauce, her lemon scented blueberry muffins, her cinnamon-sugar cookies, her rawklava or her curry cashew casserole. Dynise creates both awesome fresh, fast, healthy cafe-style dishes, as well as ornate, decadent high class restaurant-style dishes. They are all a hedonist's delight and written by someone with a the gift of the gab and a knack for impeccably worded food writing. She is helping to add accessible class to vegan (she'd want me to say plant-based) cuisine. The new recipes are organised by "Celebrations" (from traditional Christmas, Birthday, Wedding, and Chinese New Year, to the unexpected - Sick Day, Funeral, Festivus and Slumber Party), but all the recipes will get a workout in your kitchen throughout the year. I can't wait to make her Thai-centric mac and cheese. Click here for her blog.
Vegan Pie In The Sky (by Isa Chandra and Terry Hope Romero) 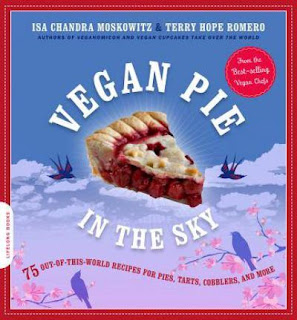 From the institution that is The Post Punk Kitchen, by authors Terry Hope Romero and Isa Chandra Moskowitz (arguably the most popular vegan cookbook authors, and with good reason). Forming a triology following Vegan Cupcakes Take Over The World (and it did! those cupcakes are faultless and earned me ridiculous amounts of "oohs" and "aahs" everywhere I took them) and Vegan Cookies Invade Your Cookie Jar, their new pie book has made it to #1 on Amazon.com's "Dessert" cookbook list. According to the testers and photos I've seen, this book is going to be amazing. All kinds of pies (in all kinds of forms, with all kinds of fillings), cheesecakes made entirely from scratch (no tofutti required!), vegan whipped cream, and plenty of dough tips to achieve delicious, flaky pie crusts for beginners. Click here for Isa Chandra's Blog, and here for Terry Hope Romero's blog.
I'm also testing for Terry Hope Romero's new vegan cookbook, which will be centered around ethnic cuisine.. So far we have had some lipsmacking things, including a juicy lemon-olive seitan, and a quinoa salad that was to die for. 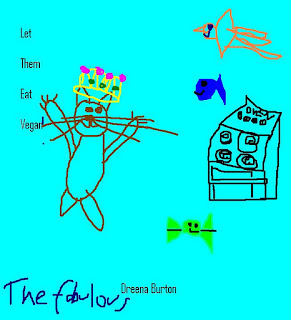 (c) The Dilettante. I'm open to any offers in case Dreena's publisher hasn't selected a cover yet.
Dreena's most recent offering, "Eat, Drink and Be Vegan" is a wonderful book that I cook from regularly, and was one of my first vegan cookbooks - it really made the journey a lot easier, and helped keep me healthy, well-fed and satisfied. For more information on what Let Them Eat Vegan will contain, check out Dreena's post on this upcoming book here. I am delighted that it includes raw recipes, lots of legume-based recipes, and promises to be wholesome and delicious. It does not rely on any processed store-bought vegan alternatives, is mostly gluten- and wheat-free, and includes a whole chapter of ice cream! Cream Cheese Brownies with Salted Dark Chocolate Topping is at the top of my to-make-list. The photography in the food is by food photographer extraordinaire, Hannah Kaminsky. You can find Dreena's Blog here.

So go and tell your partners that you NEED more cookbooks to LIVE, and get ordering!