The other day, I came across a blog post by a fantastic author, "The Urban Vegan", with a recipe for her spin on chia pudding - in a mexican chocolate flavour.

I was first introduced to chia seeds by a Naturopath who told me to add the seeds to water, wait for the "gel" (slime) to form, and then drink them. Eeeew. Saturday, I made a spooky/strange chia drink that promised to be a "Natural Red Bull" after finding this blog post/recipe on the internet. It contained chia seeds, water, lemon juice and agave nectar. I then prodded The Academic into drinking it (he's so adorably trusting of me). He wasn't impressed with the level of deliciousness (James' Note: It tasted like I'd imagine swallowing tadpoles would and it didn't give me any energy. What gives, Incas?), so was even more skeptical of my idea of a chia pudding.

Now, the blogosphere has been obsessed with chia pudding ever since it was served for breakfast (!! pudding, for breakfast??) to many of the internet's best bloggers at Vida Vegan Con. For those of you who attended: I am so jealous. I've read the blogs of everyone who attended, drooled over their photos and wished I'd been able to attend the seminars and meet so many incredible people who have inspired me in the kitchen. Believe me, I'm insanely jealous like a crazy person.

Many recipes and variations for chia pudding have been circulating on the internet since Vida Vega Con, and although it certaintly does not photograph well (it definitely falls into the category of "ugly food"), I really wanted to give it a try.

Chia seeds are a bit of a new health-food craze, famed for their high level of Omega-3 fatty acids. A number of bloggers are eating them, drinking them, and using them to replace flaxseeds for binding in baking. They seem to be up and coming in the superfood world (but like most superfoods, the pushers are always telling us how "ancient" these foods are, and how the Incans and the Mayans and the Aztecs and Minnie Mouse herself etc ate them. Who cares!? Do those civiliations even exist anymore?) but most of us are familiar with them as they were used in the form of "Chia Pets". A quick Google also reveals a "Chia Britney", and a "Chia Obama", amongst others. Hmmm..

According to the USDA (via Wikipedia):
"In a one ounce (28 g) sample, dried chia seeds contain 9% of the Daily Value for protein (4g), 13% fat (9g) (57% of which is ALA) and 42% dietary fiber (11g), based on a daily intake of 2000 calories.The seeds also contain the essential minerals phosphorus, manganese, calcium, potassium and sodium in amounts comparable to other edible seeds, such as flax or sessame."

I'm pleased to report that I made a chia pudding, and it was fantastic, delicious and satisfying. As a bonus, when made from raw ingredients, it's actually quite nutritious (even for breakfast), containing almond milk (so easy to make at home, and a particularly good source of Vitamin E and magnesium), a little bit of delicious low-GI sweetener in the form of agave nectar, cacao powder (depending on the source, a great source of minerals and antioxidants), vanilla, chia seeds, and a pinch of salt. It's a breeze to whip together, but unfortunately you do need to give it a few hours or overnight to set. We've had it twice in two days - I'm clearly impressed - it's so delicious for something so nutrient-rich. 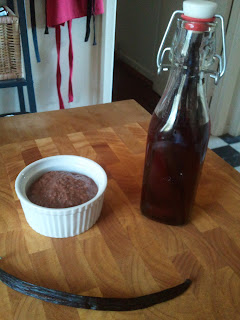 The Urban Vegan's post, with her excellent, easy recipe and a photo (I warned you it doesn't photograph well, but thank goodness for Frida Kahlo), is here. Also, The Urban Vegan's new cookbook "Celebrate Vegan" is going to be released very soon. As a massive fan of her first cookbook, which had a fantastic mix of both fancy cuisine and quick-comfort meals, I'm very much looking forward to the release of this book.

And I'm pleased to report that the chia pudding does make a good breakfast. Now that I'm back, and after having tried other raw puddings, I'm going back to making this!
Posted by Mattheworbit at 09:29