Magical Mystery Chilli Revelation (& Why You Should Adjust Recipes *To Taste*)

Chilli and Chillies - I love them! But lately, I've been very confused by them. I've gradually been thinking that I've becoming a spice-sook, because everything I make has been seeming too hot. For quite a while, we haven't eaten many spicy dishes, because it seemed like every time I did, I had my mouth blown off. Up until then, I'd always thought that chillies' adjustment to your tastebuds was like riding a bike - even if you didn't do it for a while, you'd still have the skill/taste. 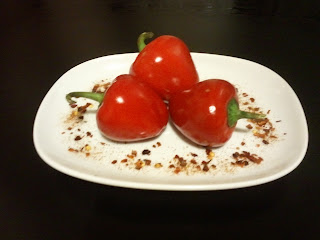 Little did I know, it was my meticulous following recipes to a T that was the problem. In the past, I've followed chilli (the dish)  recipes that were "kid-friendly", with notes like "we like this a little mild, so this doesn't have too much of a chilli-bite" and I've thought to myself, "Wow, cookbook authors have kids that love insane amounts of heat in their chilli", but it's been tolerable/delicious, and we've been fine. All that changed recently.
My favourite chilli (the dish) recipe is Dreena Burton's Sweet Potato Lentil Chilli (recipe here). The lentils make everything tomatoey-creamy thick and filling. Definitely try that one out, especially if you're new to chilli.
Sooner or later I had to enter the grown-up chilli world. HOLY MOLY these people like it hot. For example, in the delicious Isa Chandra's "Classic Black Bean and Vegetable Chilli" (from her book called Appetite for Reduction), it called for THREE TABLESPOONS OF CHILLI POWDER. Now it is a delicious recipe, but that nearly killed me flat. So I've been making it with ONE tablespoon of chilli, and even that's been a little on the hot side. So I searched the internet - everyone said it was amazing, lovely, with just the perfect amount of spice, etc. This confused me to no end.
Finally, the moment of aloneness ended. Someone posted on The Post Punk Kitchen forums that they made the above dish, and like me, they like chillies, and like me, they found it insanely hot - like Vindaloo. I finally felt vindicated, like I belonged somewhere, like there were other chilli-sooks like me who thought they liked chillies, but were wrong, and were forever doomed to be alone, listening to Tori Amos covering Judy Garland's "Somewhere Over The Rainbow", whilst crying into our super-mild Indian takeaway. But no. It was not to be. Finally, someone clarified something.
Let me allow "radish sandwich" from The Post Punk Kitchen's forums to explain:
"In the U.S. at least, chili powder is a not-very-spicy blend based on ancho chiles, but with other spices and often salt added. My understanding is that in Europe and Australia, it's just straight up chiles, so 3 tablespoons would be a LOT. Check out this thread for some past conversation on this and a recipe for chili powder. If you are using the right thing, then maybe what you've got is just really spicy?" 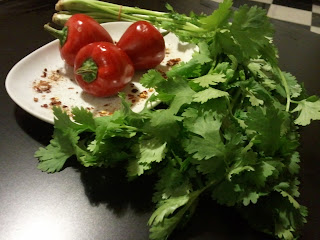 So it turns out that in Australia, our "chilli powder" is what you would expect - chilli blended into a powder. In the US and other places, it's often much, much milder, and contains other things. This is just like a bunch of other American things that confuse us all by being called different things in different countries - i.e. arugula in the US - rocket in Australia, aubergine in the UK - eggplant in Australia. I'll be doing a post on crazy-name differences, soon.
Previously, I've been a meticulous recipe-follower, and I don't think this is a bad way to start out (though I've been stuck there 5 years!) I'm starting to adjust seasonings, and learn flavours a little bit more, so that things like this don't happen again. I suppose it's actually true that we all have individual tastes, and recipes are often just the pop music that will appeal to the masses. Maybe in secret, the authors do the recipe as a punk song, or a classical song (adding crazy spices, or even more!)... and it's there to be "covered' by us. What an awful metaphor. I saw the movie "Black Swan" last night, so I'm feeling particularly dramatic. Forgive me.
So I'm not a spice sook. I can get on with my day.
And now I realise I have been staring at the word "chilli" for so long that it has somehow lost all meaning, and I wonder if it's an actual word, and if it is, have I spelled it right? Or have I written an entire post about something that doesn't exist? Oh gosh, apparently it is spelled (US - SPELT IN THE UK!) "chile" and "chile" in the US. Please excuse me while I go have an aneurysm and give up on life.
Posted by Matt at 13:03