Five Minute Home-made Almond Milk (if you fail, bathe in it! BUT YOU WON'T!)

Aaaah.. almond milk, sweet almond milk. How did I not find you sooner?

Almond milk is the best. Creamy, white, neutral, palatable, and perfect for most applications. It's easily digested, and much more nutritious than other options. And the best bit? It's easy to make at home.

Almond milk is not widely commercially available in Australia, which is ridiculous, and a shame. In our supermarkets, we have easy access to a variety of fresh and UHT rice, soy and oat milks (and coconut milk, not coconut beverage), and health food stores have further options still, but at greatly inflated prices. My mother is allergic to dairy and used to drink potato milk, from powder. She used to carry it around in a little container to mix up as required and swears that it was great, even making fantastic custard. Crazytown. Soy milk is very variable - some people love one brand and hate another, but it does have a quite distinctive taste. And the brand I like the taste of - Vitasoy - adds non-vegan vitamin D to some of their formulations, despite many requests to use vegan vitamin D.

The first time I made almond milk was for The Urban Vegan's Chia Pudding, which I covered in a previous post here. I figured that even if it was awful, it would be less noticable when combined with cacao, agave nectar, vanilla, etc. But to my surprise, it was delicious. 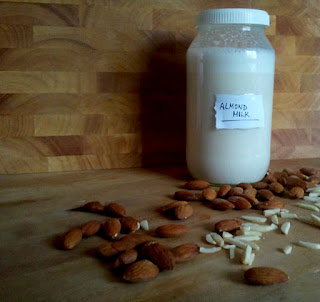 The basic formula for making homemade almond milk is simple, and all over the internet: it's simply one part blanched (skins removed), chopped/slivered almonds, to four parts water, blended on high for a few minutes until very smooth.. Then add a teaspoon of sweetener - maple syrup, agave nectar, or some dates to taste, and a pinch of salt. You can then strain it (for a smoother, cleaner finish), but I prefer not to, if the almonds have had their skins removed. That's it. For instance:

Note: If you don't have a super-high powered blender, you might wish to soak the almonds for 4-6 hours first, discard the water, and then proceed as normal. You might find you might not need to blend them with as much water, too.

1/4 cup blanched, chopped/slivered almonds, skins removed (1 part)
1 cup water (4 parts)
Blend on high for a few minutes until very smooth.
Then, add
1 tsp maple syrup
1 pinch of salt
Blend for another few minutes, and either use straight away, or chill.

From there, the possibilities are limitless.. You can add some vanilla beans or extract, cacao and more sweetener for a chocolate milk, or whatever takes your fancy. And then you can bake with it, cook with it, drink it straight - almost anything you would use another type of milk for. I should mention that my inspiration to finally make almond milk came from the new book by the fabulous and underrated Bryanna Clark Grogan - World Vegan Feast.

The reason I don't strain or use almonds with their skins on is because I personally think that this turns a simple, fun process into something arduous and messy. We did it once, it took forever, and the skins imparted an awful, bitter taste that haunts me. I ended up being so mad about all the money that I wasted that I used it as a moisturising bath, and it was weird and chalky and bitter. And then I was, too. Ew.

So just keep it simple and use blanched almonds. And I recommend making that delicious chocolate chia pudding with it! Straight away, too, as it needs to meld and thicken in the fridge overnight!.. Enjoy.
Posted by Matt at 12:31