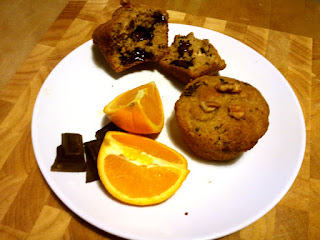 How about a batch of wholemeal (wholewheat) chocolate orange pecan muffins? Or a batch of low-fat wholemeal chocolate orange pecan muffins with only two tablespoons of oil included? The fun sounds like it is quickly exiting stage left, doesn't it? Well...
How about a batch of low-fat, wholemeal chocolate orange pecan muffins? Yeah, I've lost you now, I know. But come back, and read on for a little while longer. Bryanna Clark Grogan created this recipe. Need I say more?
After attempting to get myself together, and after James and I experimenting with raw food for a short time, we're having a tough time adjusting back to the desserts I used to make. I'm still a food snob with high standards, but too much fat and sugar this week, and I find myself pinging around the room like a madman. Enter a new recipe from Bryanna Clark Grogan (an old one for her Vegan Feast subscribers!).
Chocolate Orange Pecan Muffins
Being completely honest, I didn't expect much from these (despite my utmost respect for Bryanna Clark Grogan!), based on the fact that the recipe called for "wholewheat pastry flour", which to the best of my knowledge, we can't get in Australia. She warns against using ordinary wholemeal flour in the recipe, but I remembered in her new book, World Vegan Feast, she has looked at the protein and gluten contents of flours around the world, and had indicated that despite our inability to access wholewheat pastry flour in Australia (we can only get white pastry/cake flour), our ordinary wholemeal flour has a much lower gluten and protein content than that available in the United States.
That means, that in Australia, we should be able to use ordinary wholewheat flour in recipes calling for the pastry version. How awesome are her research skills?! This has just opened up a gazillion more recipes to my repetoire.
I've not had much luck with wholewheat baked goods in the past, but I've had some success with low fat recipes (and some very, very dry disasters), and with little to lose, I attempted this recipe.
What a pleasant surprise - they were just wonderful, somewhat rustic, and suitable for company. They were surprisingly light, moist, rose and browned well, and were delicious and satisfying. The chocolate-chunks were a lovely addition, as they melted somewhat - while keeping some firmness, the orange was not overpowering (or underwhelming), and the pecans added a lovely nutty crunch. Perhaps I would leave them chopped a little more coarsely, next time.
James' Note: And I absolutely concur; they're so delicious! Don't expect these to last long if you leave them out.
Anyway, after all of these words, I present you with a link to the recipe here and a strong recommendation that you make these! These are also similar to The Urban Vegan's citrus-scented blueberry muffins (made with coconut oil), which I think would sit alongside these nicely. Please leave Bryanna a comment when you make them (come on, we both know it's just a matter of time before you do), and keep an eye out for my upcoming post on Bryanna Clark Grogan's work. You can Bryanna's blog here.
Posted by Matt at 09:17

Email ThisBlogThis!Share to TwitterShare to FacebookShare to Pinterest
Labels: dessert, healthy, the dilettante