Even though the animals that live with us are the most adorable and wonderful and lovely and cute (PLEASE DON'T HURT ME, SYLVIA), there are some particularly adorable other animals out there. And, yes, differs from our usual posting schedule (as if we have one), but who doesn't love adorable animals?


Graeme the Cat
See the video here if the player above doesn't work
Graeme is most often see at a Melbourne train station, doing the normal cat things: lapping up attention, sunning himself, and just generally sitting around being adorable. But he isn't just any cat; he accompanies his owner to the train station in the morning for her commute to work, and then is there to pick her up when she gets the train home at night. Now that's devotion.


Polar the White Wombat
Some information and the video here
Polar is a very rare white wombat. He was found in South Australia, alone and sick, but has since been nursed back to health. There are no words for how absolutely adorable he is. No. Words. 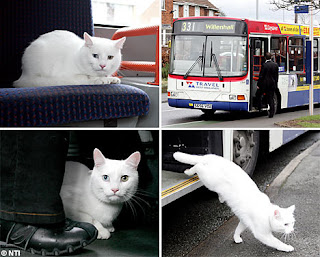 Mystery Cat "Macavity" Catches the Bus (read the story here)
Two to three times a week, Macavity catches the the 331 bus from in front of some houses, to a row of shops (including a fish and chip shop) a little down the road. Apparently cats are better at public transport than we are? He's been catching the bus since January and is apparently the perfect passenger; sitting quietly until he gets off at his stop.

And that's the wrap of cute animals this week, because sometimes it's nice to have nice news about nice things that have happened. Nicely.

Email ThisBlogThis!Share to TwitterShare to FacebookShare to Pinterest
Labels: the academic, yay