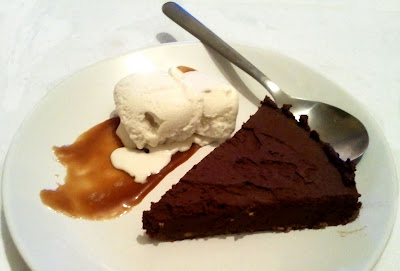 There's a reason I'm "The Academic". I don't cook. It's not that I can't... well, maybe it is. I've just never really had the time or necessity to do it, and when you're surrounded by people who already cook (very well), what are you going to do?

That said, I do have the occasional foray into the world of "cooking", mainly when I decide I want to make something I'm seriously under-qualified for. Excluding two truly awful, awful dishes I made in Grade 8 Home Economics (let's never go there), so far in my life, I've made ravioli and pizza from scratch, and a salmon (pre-vegan!) dish. And a pasta dish I invented.

But that's all in the past. Or so we thought.


A couple of weeks ago, I was searching around online and found "The Raw Chef". I've always been interested in raw food (not as a full time thing, but good (read: gourmet) raw food is amazing), so I thought "Yeah, sure, I'll sign up for your newsletter".


Turns out, if you sign up for his newsletter, he gives you an ebook of recipes! Raw food recipes!


The final recipe in the book was for a raw chocolate cake. So, because I thought it would be interesting, and as a surprise for my darling Matthew, I decided I'd make it.


Little did I know what I was in for.


Ultimately, it was relatively easy. But if you're a first timer, like I was, I have a few tips that could help you along the way, either by making it easier, or by scaring you off before you start.


Cleaning Up
Making the cake wasn't so much complicated as time consuming. And utensil consuming. If you hate cleaning your blender, or your food processor, avoid making the cake, as it uses both. Though the end result is quite delicious, so maybe you'll realise it was worth it.


On the Wallet
It's also quite expensive. While you will probably have at least some of the ingredients already, there are a couple that you probably won't. Cacao/cocoa butter and coconut oil aren't something most of us have sitting around our kitchens, and they can be quite expensive, and sometimes quite difficult to find. Additionally, you only use a small amount of each in the recipe, so you may end up paying quite a lot for a large container of either (or both), just so you can make this one recipe.


The experience alone may be worth it, and you may end up making heaps of cakes, but the last thing you want is to spend $20-30 only to have it sit in your cupboard for months, or years, until one day you find it (or something that used to be it) and have to throw it out.


So, before you invest:


Speaking of Cocoa Butter and Coconut Oil...
The reason these are used in raw desserts is that they have quite a low melting temperature, so a raw cake will set in the fridge and then melt in your mouth. This does make working with them slightly tricky, though, as just the warmth of your hands will make them melt. Of course, to make the recipe, you do want them to melt, but you want them to melt in the bowl, not all over your hands (especially after your paid all that money for it!). Before working with them, run your hands under cold water, or wear gloves, so as little as possible will be wasted. You should also start melting them right at the start, so they'll be ready to go when you need them.


You Don't Need a Vitamix!
As much as we'd all like one... We have Kitchenaid blender and food processor, and they performed quite well, well enough for the recipe. Of course, if you don't have a high-powered blender/appliance, you will need to do some things differently. I soaked the cashews before I started the recipe so they'd be nice and soft before I blended them. When it got to the "Blend everything!" part, things got a little trickier. At first, the mixture wasn't liquid enough for the blender to blend, so I had to take matters into my own hands.


It's incredibly time-consuming, and you'll probably get quite messy (as well as that part of the kitchen), but it's that or shell out a thousand or so for a Vitamix.


Well, two thousand, since you're buying me one. Please? :D


In The Beginning
When you're standing in your kitchen about to start, STOP. There are a few things you should do before you even consider starting.


And Just a few final tips:
End the end, it was a lot of work, but, especially if you're making it for someone you love, it's all worth it.


Will this be my first and last foray into raw food? Probably not. Will I be making any more of it myself? Well... I guess only time will tell.